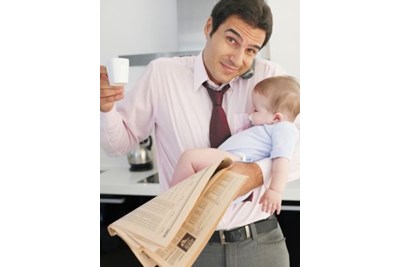 Nearly a third (32%) of fathers regret not taking any, or enough, leave after the birth of their child, according to research by the Department for Business, Innovation and Skills (BIS).

The survey also found one in five (21%) dads said they regretted not being present as much as they would have liked during their child’s first year due to work.

BIS released the survey in advance of shared parental leave legislation coming into effect in April. It allows mothers and fathers to share 50 weeks of leave and 37 weeks of pay equally.

Almost a third (29%) of the dads surveyed said they would have taken up the right to shared parental leave had it been available.

The BIS stats indicate two-thirds (66%) of men who are thinking of having children intend to use shared parental leave.

Deputy prime minister Nick Clegg said shared parental leave will “relegate out-dated assumptions that women will always be the parents at home while fathers go out to work”.

He said: “We know more men want to be more involved with their children at home and, crucially, we know the difference it makes to a child’s development when they are.”

Employment relations minister Jo Swinson said: “Letting couples choose how to share parental leave and pay in whatever way works best for them will mean mums and dads get to spend time developing that vital bond with their baby in the early stages.

“Dads care just as much about first steps and first words as mums, so it’s crucial that the system gives fathers the chance to be there.”