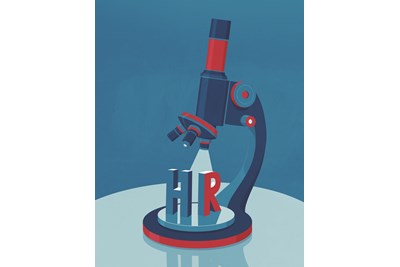 Maxime Loose, internal HR and OD consultant at the Government of Flanders, shares how he has used evidence-based HR (EBHR) in practice.

“Before I got into HR, I was a researcher and worked in occupational psychology. When I came into HR, I was surprised by what I saw – theories like Maslow and MBTI being used. As a researcher, my modus operandi when I get a question is to read about it and then make a decision. In HR, many people tend to decide based on gut feeling.

We act as consultants internally. It’s important to raise awareness in your organisation and convince leaders that it’s important, so they say: ‘When you come to me with something, make sure it’s solid and you are sure about it’.

Sometimes when we get questions from top managers, they want an answer tomorrow, not in a week. But it’s vital we focus on the long-term. We are creating toolboxes around the topics we work on, to consolidate our knowledge. We include information from the four sources and try to integrate them so that when we make a decision on a new HR or OD policy, we do it in an evidence-based way. It’s about building solid foundations.

So far, we’ve done projects around whether we really had a problem with burnout in the organisation and used evidence to come up with a better process for identifying high potentials. We are currently working on a project looking at how open work spaces affect productivity and another about whether autonomous teams impact on customer satisfaction.

Data is really important, but it is not the only source of evidence. Scientific literature is important in helping you to form a hypothesis and helps give context and meaning to organisational data. It’s not only about numbers but aggregating all forms of evidence. It’s like proving a case in court.

There are two reasons why this is important for us. Firstly, the government is under a lot of pressure; there’s a lot of debate around how efficient and effective it is. Evidence-based management can ensure the decisions we make are more effective and efficient.

But it’s also a matter of professional integrity. As HR professionals and managers, we are making decisions that impact on people’s lives and the results of the organisation. When we make a major decision, we should make it to the best of our ability. This methodology helps you to make the best possible decision. And I think it’s important we make HR a profession.”