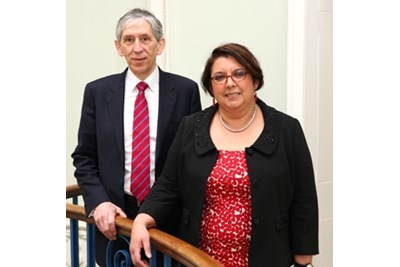 At the launch of Government-backed movement Engage for Success in November last year, a powerful video was shown. In it, a young man rails to the camera about how organisations in the UK should “give employees a voice” and “create a place where people want to shine”. Most potently, he declares: “I’m not a human resource; I’m a human being.”

"That expression has certainly caught on," says David MacLeod, co-founder of the Engage for Success movement, sitting in the office of co-founder Nita Clarke in London's Somerset House. "It all comes back to four 'pillars'," he goes on. "Strategic narrative, engaging managers, employee voice and organisational integrity".

These four pillars (or enablers) of engagement were first identified by MacLeod and Clarke some five years ago. Back then, they were asked by the Labour Government to produce a research paper on the importance of engagement to the UK economy. Their influential work, Engaging for Success, was published in 2009. "That original report was a move to say that this isn't just soft and fluffy, it's a performance-driven issue," explains MacLeod. "When the Government requested more help, we said we never wanted to take part in a paint-by-numbers approach, but we did want to raise the profile of the importance of the topic and shine a light on good practice."

"We were just very lucky when we were originally asked to do the work," says Clarke. "It was the right place and the right time, and since then it's taken off." But despite their modesty, MacLeod and Clarke have become the faces of employee engagement in the UK ("God help engagement!" jokes Clarke). Their original report has led to the creation of the taskforce Engage for Success, backed by the Department for Business, Innovation and Skills, which is spearheading a movement. This movement brings together the experience of leading practitioners, the ideas and research of leading academics, and the findings of think-tanks, to share learning, ideas and practical guidance on employee engagement.

As Clarke suggests, the movement has taken on a life of its own since the launch. More than 1,000 people from hundreds of organisations have got involved, so far contributing over £1 million in time, resources and expertise. And as the snowball grows and grows, it's clear its success is surprising even to its founders. "What makes Engage for Success absolutely unique is that it's a voluntary movement," says MacLeod. "I don't think there's ever been a spontaneous voluntary movement like this. The raw material is energy and people caring about the issue, some for their businesses and some from a wider perspective."

For those involved, the effects are proving equally powerful. One secondee (organisations are invited to second people to work on the taskforce for limited periods of time) fed back to MacLeod: "I am struck by the positive impact the team and movement has had on me. Experiencing the energy, excitement, enthusiasm, passion and sheer belief has been overwhelming and very humbling."

As more and more devotees have become involved, in sectors from retail to banking, charity to hospitality, so the range of what Engage for Success has been able to explore has grown. There are sub-groups exploring how engagement underpins and drives innovation, how to engage people across cultures and countries, engagement through adversity and the relationship with wellbeing, as well as the barriers that exist, particularly at the CEO end.

MacLeod is keen to stress that putting things into practice is very much at the heart of everything the movement is doing. "We are not trying to write another book on engagement. We are trying to get insights from people to help others address things in simple, powerful and easy to harness ways."

Clarke and MacLeod now have the 'finish each other's sentences' kind of relationship, with Clarke joking that she sees MacLeod "more than my husband - I don't know who is more pleased about that". But they come from very different backgrounds. Clarke has gained most of her experience working in trade unions, and also worked in Tony Blair's office in Downing Street for seven years. In contrast, MacLeod learned most of what he knows about business in private sector organisations, and has never held an HR role.

Similarly, many of those involved in the movement have diverse backgrounds, from the CEO of a FTSE 100 corporation, to the HR director of a public sector organisation, to the MD of a small business. And just as the Engage for Success message is effectively straddling various organisations and sectors, private and public, so the movement has managed to survive a change in government without any visible drama. "It's very unusual for strands of work to transfer seamlessly from one government to another," points out Clarke. "This is one of the very few that has - and that's a key strength." MacLeod name-checks employee relations minister Jo Swinson for being "absolutely committed, inspiring and encouraging".

However, they both admit that, although prime minister David Cameron may have launched the taskforce himself and does seem to 'get it', other departments require more work. "Across government, there is more to do," says MacLeod. "The Treasury, for instance, needs to understand that engagement is a vital component of growth. If only a third of people in the UK workforce are engaged, then two-thirds are not giving their best. We're in the middle of one of the worst recessions in living memory - this is a vital topic for the country. We don't think that's fully clicked in the business community or certain parts of government. If it had, we wouldn't be talking."

Clarke points out that many of the public sector changes - especially those that have involved brutal downsizing - have not "necessarily placed engagement at their heart". She says: "That slash-and-burn approach leaves the workforce demoralised. But this movement is about doing difficult things like downsizing. We can show you places where the workforce has been reduced but levels of engagement have gone up. It's because the challenge has been explained to the workforce, their ideas have been taken on board and there's been a partnership. Anyone who says 'we can't do this because there's a recession on' just doesn't understand what engagement is."

On paper, employee engagement sounds like a total no-brainer. The report, Employee Engagement: the Evidence, is 33 pages of irrefutable proof that engagement isn't just something nice to have, it brings substantial ROI and competitive advantage. "The ROI is bleeding obvious," says Clarke. "If you're not trying to improve engagement, you may as well be standing on top of a building chucking money away."

So, if the benefits of engagement are so "bleeding obvious", why isn't everyone doing it? The answer is that, although it is easy to dismiss as fluffy, engagement simply isn't easy to do in a "transformational" way, as Clarke and MacLeod dub it.

"When organisations start thinking about engagement, it doesn't half open Pandora's Box," says Clarke. "When you diagnose your engagement challenges, it throws up other internal challenges, such as silo working. A lot of them get put in the 'too difficult to do' box. It is a simple concept on one level, but it is not fluffy: it is profoundly tough to do it in a transformational sense."

Is this where HR can step forward and play a mission-critical stewarding and catalysing role? MacLeod certainly thinks so.

"HR needs to be expert," he explains. "They need to orchestrate how to find engagement in a transformational way. HR's role is to make sure the line is managing people in a completely engaging way. Right now, engagement is patchy. There's a lot of talk about it, but it's at two levels. One is the transactional conversation - doing the research and improving communications. To benefit takes a much more profound sense of commitment and understanding. It's that transformational engagement which helps organisations power ahead. This is HR's opportunity to be at the top table, to help the CEO and top team ensure people are behind their strategy."

With MacLeod citing a statistic that 70% of employees are neutral or do not trust their bosses, it's a task that is anything but easy. It requires abandoning the traditional 'command and control' leadership many CEOs may be used to. "There are four ways to improve your business: innovating, giving great customer service, finding cheaper ways to do things, and entering new markets," says MacLeod. "You need everyone in the organisation pulling those four things. That needs trust, lack of hierarchies and less deference."

But leading that way is demanding. "To lead engagingly, CEOs have to open up," MacLeod continues. "Command and control leadership is much easier, it just happens to be less successful in the long run. Yes, in a crisis you need command and control, but the whole point is to stay out of crisis."

By now you may be feeling both inspired and overwhelmed. Never mind; MacLeod and Clarke characterise engagement as a journey. "Companies tell us that the more effort they are putting into this, the more they see there is to do," says MacLeod. "We feel the same. You can never envisage a situation where all organisations are transformationally improving themselves through employee engagement. There will always be people who are learning."

Clarke adds: "We've enjoyed pushing the boundaries around engagement, challenging the Government, the country and the business sector. But the engagement journey never ends." If you haven't done so already, it could be time to jump on board.