Employers must understand the causes of addiction 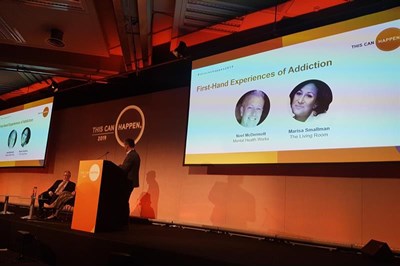 Marisa Smallman, a former broker and therapist, spoke of her struggles with addiction in the workplace at the This Can Happen: Empowering workplace mental health event

It can be difficult to open up in the workplace when you are struggling with addiction, according to former broker and therapist Marisa Smallman.

In an interview with psychotherapist Noel McDermott at the This Can Happen: Empowering workplace mental health event, Smallman said that other employees often have misconceptions about addiction.

“It can be very difficult to tell people at work that you’re struggling because they’ll assume that to fix it, you just need to get rid of the drugs and the alcohol, but that’s not the problem," she said.

"I was addicted to alcohol and cocaine, but if I wasn’t addicted to that, it would have been something else.”

Smallman explained that alcohol and drugs were symptoms of her addiction, not the cause of it.

Instead, the origins of her problems were often deeply personal and emotional.

“I was in an extraordinary amount of emotional pain all the time. I felt incredibly angry and lost. If anyone asked me how I was, it was like pushing a button, I would just start crying. I cried all the time.”

Smallman, who has been clean and sober for 14 years, first started using cocaine when she started working in banking in her twenties, using it to help her cope with feelings of anxiety.

“I started working as an equity derivatives broker when I was 22 years old. I started doing cocaine because a colleague told me it would make me ‘pretty, titty, and witty', which sounds funny but in a way it’s not," she said.

“Drugs gave me what I could not. When I wasn’t on drugs, if I was in a room full of people, I felt completely uncomfortable. I did not feel ok. But cocaine gave me something that I couldn’t get for myself. Opiate addicts often take heroin because they want to forget something, cocaine addicts use because they have incredibly low self-esteem.”

At the time, there was a culture where drinking and drugs was normalised in the banking sector, Smallman said.

“We went out most nights and expenses were unlimited and often weren’t checked. It was normal to fall asleep at lunchtime or to come into work drunk," she said.

“It sounds a little crass, but because I was still good at my job and earning a lot of money, I didn’t have to face up to what I was doing. I was still able to spend thousands of pounds a month on my addiction and pay for people to do my washing and cleaning.”

Smallman said she eventually hit rock bottom and had no choice but to seek help.

“For a long time I just did the bare minimum at work, I did anything I could to get home where I could take drugs alone," she said.

"Eventually, I did lose my job. I ran out of money and remember going to the bank saying that I had to sell my house and my car. They said no, so I went to my mum’s and told her everything had gotten out of control.”

From attending 12-step recovery programmes and Alcoholics Anonymous (AA), Smallman said she learned that addiction doesn’t discriminate by background: “At first, I found it so hard to call myself an addict. I was a nice north London girl who had been to private school. But I learnt so much from so many people – you can still be incredibly clever without a formal education. I made so many different friends from entirely different ages and socioeconomic backgrounds. They say that the opposite of addiction is connection, so that’s what really saved me.”

While seeking help is a difficult process for addicts, employers can help, she added.

“A little bit more understanding from employers can help. You can’t always do that until they’ve stabilised and allow them to get the support the need," said Smallman.

“Once I did go back, I got an entirely new set of client – ones who preferred opera to drinking and my boss let me go to AA meetings in the afternoons. Addiction is the only illness where you don’t know if you have it. So maybe if someone told me I was [an addict] sooner, it might have given me a push.

“Ultimately though, most addicts will only be able to get help once they’ve hit that rock bottom. But you must remember that as long as you’re still breathing, you can get help.”