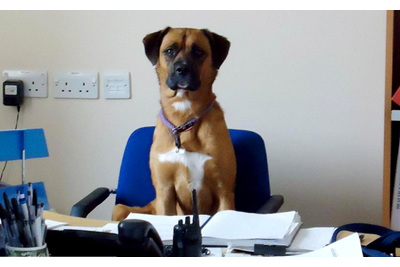 Almost half of us would like to bring animal companions to work, according to research of more than 1,000 UK workers from job site reed.co.uk, seen exclusively by HR magazine.

More than one-quarter of people would consider taking a lower-paid job if they could bring their pet to work.

Nearly half (46%) of those polled said they would work better with their favourite animal around, and more women agreed with this statement than men. The old image of a security guard with a faithful hound may be more than just a stereotype, as 80% of people in the safety and security sector said they would perform their role better with a companion. And half would be willing to take a pay cut if it meant having their pet by their side.

Dogs are the most popular animal by far, with 72% of workers opting for man’s (and woman’s) best friend.

Next Model Management is named in the research as one of the most pet-friendly workplaces in the country. Director of public relations Katy Moseley said dogs in particular can bring a “calming influence” to the office.

“Whenever a model or client comes through the office, the dogs are on their best behaviour,” she said. “The models love to entertain the dogs and vice-versa.”

Charity Blue Cross is another vocal advocate of the benefits pets can bring to company premises. Head of rehoming Mandy Jones said that pets provide benefits for both employees and visitors. “So long as the dogs are trained and not disruptive we find it a very positive experience for everyone,” she said.

Pets at work are still far from the norm in the UK, but the research certainly suggests there is an appetite for it in the future. With people this attached to their furry friends, how long until employers will have to offer peternity leave?