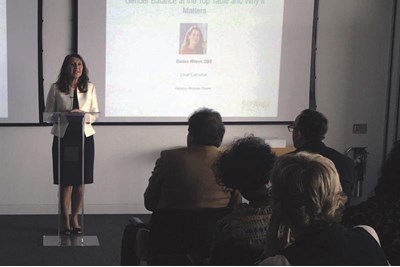 Educating and influencing is preferable to quotas in improving gender balance at a senior level, according to Denise Wilson, chief executive of the Hampton-Alexander Review.

Speaking at the Association of MBAs’ Employers Forum 2017, attended exclusively by HR magazine, Wilson said that the “UK government should be prepared to legislate” to introduce quotas around women on boards “if we don’t move fast enough”.

“I’m not sure we need it yet,” she caveated however. “But it’s helpful to have in your back pocket.”

Wilson discussed the progress made since the Davies Review began in 2011: “This might shock [people] today, but when we started, a third of FTSE chairmen said ‘about time, this is embarrassing, how can we help?’ But another third wanted to sit on the fence and see whether this was just a 2011 issue that might go away. And another third was: ‘over my dead body, no-one will tell me who sits on my board’,” she reported.

In the early stages of the Davies Review it was important to “use a language that business would understand,” reported Wilson. “We didn’t ever actually talk fairness or meritocracy, though we could have,” she said, adding though that “interestingly we don’t have to talk that business case anymore; you rarely get asked about that… people just get it.”

Wilson said there is still a huge challenge ahead however. “This is a task that needs a lot of hard work over a long period of time. It requires determination and stamina,” she said, pointing to several women in leadership myths that still need challenging.

One of these is that women lack confidence, she said. “What they lack confidence in is the company and its leadership,” Wilson stated. “When [women] look up they don’t see where they fit.”

Wilson entreated firms to investigate the particular issues obstructing women at their organisation so they know what actions to take. “This needs to be started like any other business issue because it’s a serious one and hard to fix,” she said. “So you need data to start to understand where your gaps are.”

She recommended firms choose just two or three actions to focus on. “No organisation has the capacity to do more than just a couple of things [at a time],” she said, adding that allocation of greater investment and resource here was often needed. “I know huge organisations whose budget for this is only around £30,000, yet their marketing budget is several million,” she said.

“We have to think creatively and be prepared to challenge and push back,” Wilson added, citing blind recruitment at orchestras, and an example of a company that stopped asking women their current salaries: “Otherwise you’re just perpetuating careers of being under-paid.

“You need to understand: why are women not applying to your organisation? Is it culture, is it pay, what is it?” she said.

Wilson also mused on what the overall aim or target is in redressing gender imbalance at the top. “I don’t know when we’ll be there,” she said. “It’s not necessarily 50%; we will know and feel when we have gained that balance.”