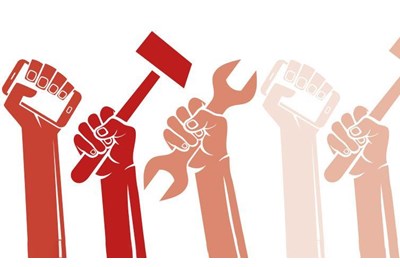 Look at the general secretaries of the major trade unions in the UK and you’ll find a sea of white, middle-aged, male faces.

“When they appoint people to work as organisers on the basis of politics rather than ability, it’s a bit of a recipe for disaster,” says Labour peer Margaret Prosser. “They want to employ people in their own image, people who share the same political line and who they understand – so in the main we’re talking about white men.”

Particularly concerning to Prosser is that a requirement she and Bill Morris (Britain’s first black general secretary) implemented, that all union lay officials must undergo equality training, has been axed since they’ve both retired.

Yet someone is most likely to be a union member if they’re a woman, black or disabled. Which means unions “don’t talk the same language as a lot of people they want to represent so there’s a mismatch,” says Marshall-James CEO Andy Cook.

“They still call each other brother and sister which is a bit old school,” says an HR director, who did not want to be named. “If a member is non-binary then they won’t want to be called brother or sister, but I don’t think they’ve thought about that. So while they’re trying to modernise in some areas, they have a way to go in others.”

Wellbeing is another area unions have a poor record on, this HRD adds: “Because they’re so militant there’s no switch off.”

“The internal culture of many unions leaves a lot to be desired,” agrees RSA chief exec Matthew Taylor. “I’d pin the blame on politics – issues like diversity and modern management are often relegated behind the question of who’s side you are on.”

Exec director of Unions21 Becky Wright points out that, though at 39 years old, she’s often still the youngest person in most rooms, “there is more diverse make-up now”.

“I was part of an initiative to get different people into the union movement,” she says. “There was a whole cluster of younger people from different ethnicities and backgrounds coming in trying to shake up the movement.”

Kuldip Samra has worked for Unison for 30 years and is now head of HR and employment relations. She says that when she joined she was “probably the only individual in the northern region from an ethnic minority background”.

“It’s changed a lot over the years,” she says. “For example, in our general secretariat now four people are women and one is black.”

This is down to HR at Unison introducing several D&I initiatives, including a gender pay gap working group, black leadership course and women’s leadership course. A current focus for Samra is a project which will “draw people from across the union from different levels and backgrounds to generate ideas and initiatives”.

There’s also growing diversity in the skillsets unions recruit for, says University of Glasgow’s Melanie Simms: “In the past people tended to work for a union that represented the job they did. Now officers tend to be individuals with campaigning and negotiating experience. This has professionalised that group of workers.”

Union HR brings other unique challenges, says Samra: “You’re dealing with individuals who [will] fight for what they believe is best as they’re representing our members out there. So we must practice what we preach.”

It’s something of an unusual setup, in that HR at the union must also deal with unions for its own workforce. Which Samra believes demands a particular set of HR skills: “It’s different as most of your staff are organisers so they know employment rights, so you need to be highly skilled and experienced.”