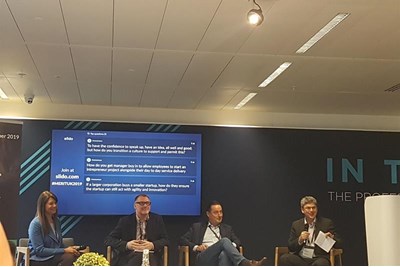 Developing so-called 'intrapreneurs' is an organisational necessity, according to Paul Coyle, founder and director of the Entrepreneurial Mindset Network.

Speaking on a panel at the MERIT Regional Summit in Manchester, Coyle explained that intrapreneurs are employees who act like entrepreneurs but from within their organisations.

"As we face a future which is increasingly conflicting and ambiguous, it becomes clear that we must encourage everyone to become entrepreneurial,” he said.

“Whether you’re working in pharmaceuticals or you're making cartoons, your organisation will change, and the most important thing you can do is find out how to deal with that change. That’s what being an entrepreneur is all about.”

Alex Kotsos, HR director of Brown Bag Films, shared her experiences of how being out of work before finding her current role forced her to become more resourceful.

“I kept going for interviews and not getting anywhere. I was unable to get a job in HR at a meat packing company, which wasn’t even something that I was particularly interested in," she said.

"But it turned out to be one of the best things that ever happened to me. I came across the idea of positive psychology and strength at work, and realised that if you are energised and motivated by something, there is absolutely nothing that can stop you.”

However, there were conflicting ideas about how to identify entrepreneurs. Aernout van Heusden, business development director at the Academy for Corporate Entrepreneurship, said it's about finding people brave enough to venture ideas.

“Everyone has the potential to be an entrepreneur; everyone has the ability to come up with new solutions. But not everyone will have the balls to come out and say something, and those are the people that you need to find," he said.

But for Kotsos, an employee's ability to voice ideas at work will depend on whether they have a solid support structure. “I don’t think this is about whether you ‘have enough balls’ or not. People need to feel as though they are in a psychologically safe environment," she said.

"There are people in your business who can help to make things simpler and faster. There are so many problem-solvers out there. But they have to feel as though they are being listened to. It's the most important thing we can do."