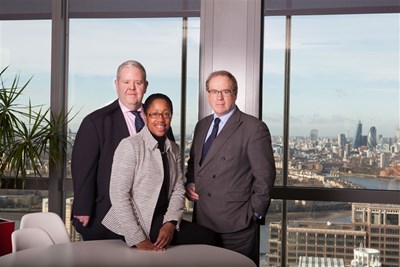 When telling the story of Crossrail, it’s all too easy to blind you with numbers and superlatives. This £14.8 billion railway, Europe’s largest infrastructure project, will deliver an extra 10% capacity for London’s rail transport and run over 100km. But the project’s CEO Andrew Wolstenholme (above, pictured right) is keen to point out this is a story about people.

“This is a fantastic project, but you might get the impression the people side and the values side are low on our radar,” he says. That couldn’t be further from the truth. “This is different from other construction projects,” he continues. “It’s a project I hope is going to set a new benchmark, because we put people at the heart of what we do. Everyone’s mission is the same. This isn’t just construction; this is about 14,000 direct jobs, delivering a world-class railway and moving London forward.”

What makes Crossrail so interesting – and challenging – is that it involves many different organisations, across several industries, all collaborating under one umbrella. “As CEO, I am bringing four different industries (consulting, construction, rail and transport) together,” explains Wolstenholme. “We are having to change our organisation through several different phases. [We are] a Plc that has to morph, grow and be dynamic. The most important thing is the people side and setting the vision and mission.”

That’s why Wolstenholme has taken the time to speak exclusively to HR magazine at the project’s head offices at the top of a Canary Wharf skyscraper, aptly looking down on the city whose transport it will change forever. It’s also why talent and resources director Valerie Todd and head of organisational effectiveness Rob Jones are sitting round the table with him. Integrating so many organisations needs a high-performing senior leadership team, and Crossrail certainly appears to have one of those, with people and purpose at its centre.

“At the very beginning, you start with how you deliver the project, but within that there’s a set of things about how you build the workforce,” explains Todd. “We knew we were not going to have a workforce who were directly employed – we have a central team and a very extensive supply chain. You’ve got to think strategically about how you get the guy with the spade feeling a part of something in the same way the chief executive feels a part of something. You have to create the conditions where that can happen.” And those conditions are working; at the time of the interview, Crossrail is 62% complete, on time and on budget.

When Wolstenholme joined Crossrail in 2011, he felt while the project had a vision that was fit for purpose, it wasn’t good enough to meet his wider aim of raising standards in the construction industry. “To inspire people, you had to set a mission that was higher than people expected,” he says. The mission he instated – moving London forward – is backed up with a set of values and behaviours that have been embedded into all of Crossrail’s practices and processes.

“I genuinely believe these approaches – the mission, the vision – are what differentiates great from good,” Wolstenholme reflects. “We are focusing on what it means for people to be part of Crossrail. How do you make sure people feel part of something very special? That’s why I get out of bed in the morning.”

Rather than just implement the mission and values straightaway, Wolstenholme, Jones and Todd were keen to involve employees across the whole project in their thinking, road-testing their ideas in town halls across the line. They also spoke to their contractors to make sure there wasn’t anything that excluded them or sat in conflict with their missions and values. “This is for people who work on Crossrail, not for Crossrail,” says Jones. “The minute you put your foot on site, you’re buying in.”

He adds that “the culture of discussion and open conversation” continues to “pleasantly surprise” him. Beyond the values consultation communication remains crucial, with leadership ensuring they remain visible and visiting sites regularly. People are happy to give their opinion: last year 93% of staff completed the engagement survey (with an average score of 78%), a significant achievement for a project spread across several sites.

Back to the values, the result of the consultation is not especially high tech – Wolstenholme proudly shows me a small, battered, pink booklet. He says there was scepticism at first when the values were rolled out, but that now even the most cynical are engaged. To ensure the values have legs, theyare also tied to a peer-to-peer recognition programme, says Jones. “One of the delivery directors said to me: ‘I thought this was a load of nonsense, but now I see it’s the best lever I’ve got to drive performance’,” he recalls.

Safety is Crossrail’s first value, something Wolstenholme says is usual for the industry: “Normally on these projects, safety could compete against time and cost, but the first thing you have to do as a leader is role model and set the standard. Safety is a priority; it never competes.” Other values are inspiration, respect, collaboration and integrity.

Jones, who is responsible for OD and ensuring alignment across the project, says the values book has “massively helped” to bring a disparate group of people into an integrated organisation. He uses the analogy of the British Lions rugby team: “We’ve got two partners and within that there are nine different employers, but this is the Lions, not the four home nations. That’s been a journey and a challenge. It’s not just about the cultural efforts but about aligning the framework, incentives and agreements.”

“Collaboration in this environment is hugely important,” agrees Wolstenholme. “The contract tells you what to do; it doesn’t tell you how. This is not an industry that simply comes together and delivers. You have to work at changing the dynamics of the organisation, treating everyone as an individual but also as part of an integrated team. To do that, we need the capability within our HR function.”

When it comes to the ‘how’, investment in people is key. This might be surprising, after all Crossrail is what Jones refers to as a “pop up organisation” and will be gone by 2019. Why, for example, bother to invest in developing junior leaders from the different organisations working on the project?

“One of the challenges when we first started was people saying, ‘Why invest in people? You’re only here for a short time’,” recalls Todd. “That would have been an easy option, but we wanted to be more than a project delivering a railway. We wanted to be an organisation that influences and changes the industry. We wanted to make sure people from all backgrounds saw this as an exciting environment to work in. It’s about more than being a project; it’s about being an industry leader. It hasn’t been easy and we’ve all got scars, but being given £15 billion of public funding, we had an obligation to do more than build a railway.”

Not too surprisingly, skills – or lack of them – have been a huge issue for Crossrail. Todd says just after the project received Royal Assent, it became painfully clear there would be a significant shortfall in the skills needed. “There was a view the market would sort itself out and you could recruit from abroad,” she recalls. “But we took the view that that wasn’t a responsible approach when there was an opportunity for local people to be developed.”

Instead, Crossrail used some of its funding, as well as money from the Skills Funding Agency and financial support from its contractors and suppliers, to set up the Tunnelling and Underground Construction Academy (TUCA) in east London. TUCA opened its doors in 2011 and has since trained more than 8,000 people, including many locals who were previously unemployed. It has also taken on nearly 400 apprentices to date, and requires contractors to engage with local unemployed groups and offer apprenticeships. “We don’t do all that because it’s nice,” says Todd. “We do it to make sure there’s a workforce for other projects.”

“Crossrail looks at the holistic view,” adds Wolstenholme. “For a moment you have to hold an industry baton. If Crossrail is able to behave with public finances in this way, why shouldn’t others? The industry is beginning to take ownership and it’s beginning to make a difference.”

But with the UK facing a chronic shortage of engineers – figures from Engineering UK suggest this could cost the UK economy up to £27 billion a year if companies fail to hire 182,000 engineers annually until 2022 – the next generation needs inspiring too. To excite younger people about the world of STEM (science, technology, engineering and maths), Crossrail works with local schools via its Young Crossrail Programme.

There’s also an opportunity to connect the dots across the various initiatives, says Jones, citing the example of employees on the leadership programme working with a local school to build Crossrail in the popular video game Minecraft.

Increasing diversity across the construction and transport industry is another legacy aim. Todd says that while Crossrail is “slightly bucking the trend” on gender diversity in the industry – the project has 29% women working across it, compared to an industry average of 10%-15% – she still feels it “is not good enough”.

“There’s a lot more we can do to promote the industry to women,” she says, adding that Crossrail runs a number of campaigns around diversity. There has been a particular focus on inclusive leadership – “making sure we lead in a way that makes women feel a part of things” – and unconscious bias, on which there has been compulsory training for managers. Crossrail also runs a ‘Respect Week’ to reinforce the importance of inclusivity. “It’s unacceptable to run a programme of this size without considering diversity and inclusion,” says Jones.

“The industry itself has got to change,” adds Todd. Crossrail has set up a working group, which includes HR professionals from all its main contractors, to share ideas and develop a training programme around D&I in the construction sector. “We are trying to awaken the whole industry,” says Todd. “It has to take a lead on this.”

Crossrail as an organisation will no longer exist come 2019, but its legacy will live on via other major construction projects like HS2. What kind of footprint would the team like to leave behind? On the subject of diversity, Jones says he would “be happy if 10,000 people walked off Crossrail thinking: ‘I need to have more difference in my team’”. He adds: “Diversity has never been about tokenism, it’s been about having different ways of thinking about and looking at the world.”

Todd says she would like people to leave the project thinking “‘I have a higher standard in what I expect from my employment in future’, whether it’s around engagement, communication or diversity.”

And for Wolstenholme? “By 2018 we will deliver a world-class railway, change transport across London and move communities forward – that’s the what,” he reflects. And the how? “I want people to be proud to have worked on Crossrail. I hope their eyes will have been opened because they were part of a team that worked to a set of values and delivered against their mission. I hope that will equip them to help their organisations live in a world where sustainability and legacy is embedded in how they operate.

“If a little bit of Crossrail can be left on this industry, that would leave me with a sense of pride that what we are doing is not just building a railway line, but building a different way of doing things, centred around people.”