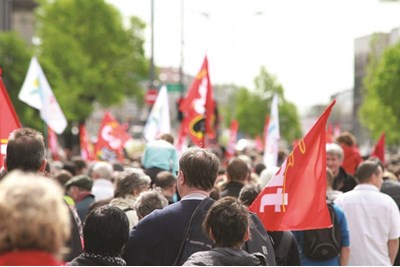 Union membership is low among young people, but the gig economy could be an opportunity for unions to boost numbers

It could be the catalyst for a resurgence in union membership, according to some employment experts.

Trade union membership has declined particularly among young people, research shows. Analysis from the TUC found that membership among 21- to 30-year-olds fell from 20% in 2001 to 15% in 2017.

Margareta Jensen Dickson, group head of people at ferry operator Stena Line, emphasised the continued importance of unions, even in a landscape of more employee rights-focused HR functions. But she said that she doesn’t believe traditional unions are doing enough to keep up.

“They [unions] are vital to us. People will always need HR to turn to within the workforce, and they will always need a union representative to act outside of it,” she told HR magazine. “But there is a generational shift… I definitely worry that unions are not doing enough [for] younger workers or future generations, for whom the world of work is changing rapidly.”

In February a deal struck between courier company Hermes and the GMB union was seen by many as a turning point. Following a 2018 employment tribunal GMB agreed to a deal of optional ‘self-employed-plus’ status for riders, which includes holiday pay (pro rata up to 28 days) and individually-negotiated pay rates of at least £8.55 per hour. In return couriers have to follow delivery routes specified by Hermes.

The case demonstrates a new more positive outlook for unions, said Lee Harding, partner at law firm Morgan, Lewis & Bockius. “Interestingly a union can obtain statutory recognition for both employees and workers in the UK. So this is a good way for unions to demonstrate their value,” he told HR magazine.

“Following the Hermes case the employer entered into a voluntary recognition agreement with GMB, meaning that the union was given a seat at the negotiating table.”

He added: “Some union activists see the gig economy as an opportunity to replenish their membership as they liken the working conditions of contractors to those of ordinary employees at the start of the Industrial Revolution, and before we had much of the employment and social protection we have for those employees today.”

However, others see this landmark case as a watering down of union power. James Farrar is chair of the United Private Hire Drivers union, a branch of the Independent Workers Union of Great Britain (IWGB), which helped to organise hundreds of Uber workers striking over low wages last month. In 2015 Farrar, along with then-driver Yaseen Aslam, brought the first tribunal against the firm which argued that Uber drivers were workers not self-employed. He told HR magazine that unions should not accept less than full workers’ rights.

“On the one hand this does show a victory for workers,” he conceded. “[But] I would never be able to turn around to the workers that I am representing and say that we had won a case where our basic demands have not been met. Either an employer meets our terms, or it doesn’t.

“Uber has tried similar tricks with us, but we won’t accept anything less [than worker status],” he added, explaining that the firm had offered insurance cover and paternity and maternity leave to drivers last year but with “highly conditional” terms attached.

Farrar added that generational differences in union membership have been overplayed. The bigger problem is unions’ continued focus on traditional employees over “precarious” workers, he said, where the opportunity to make a bigger difference as a union perhaps lies.

“We have grown as a union year on year, and there’s no magic wand to that; we look at the issues facing the workforce and we go out, we talk to people and we address them,” he said.

More attention must be paid by both unions and HR to other demographics besides age when it comes to ensuring representation of vulnerable workers, said Farrar. He pointed to research from the TUC that showed BAME individuals were twice as likely as white individuals to be on agency contracts.

“The number of BAME women on temporary and zero-hours contracts in particular has soared, and our membership is more than 90% BAME. I think that’s something that can’t be ignored.”