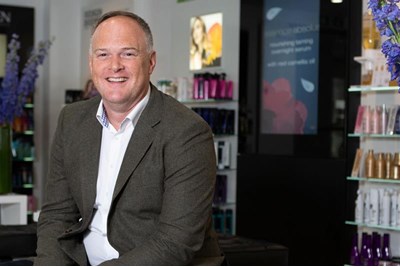 When L’Oréal’s Paul Gilliam joined the beauty giant in 2016 from Air France KLM, some of his friends weren’t convinced the move was the best shout. “I left New York in an office next to Central Park to come to Hammersmith, where the office was a building site at the time,” jokes the HR director of UK and Ireland. “My best friend in South Africa was like ‘What are you doing? Are you going to fly here on a giant lipstick or something!?’”

But when HR magazine meets Gilliam at L’Oréal UK and Ireland’s HQ in West London, it quickly becomes apparent that there are more than a few perks to his latest gig.

“There are amazing experiences,” he says. “For example, the Lancôme team is often involved in the Baftas, L’Oréal Paris does Cannes Film Festival, Maybelline does London Fashion Week. So there are these big events and we try to get people involved in unique experiences that other companies perhaps can’t replicate.”

Watching Gilliam pose for photos in front of the rows and rows of shiny beauty products on display also offers a glimpse into the scope of the business, which with 36 brands in UKI alone (and many more in other parts of the world), is today the world’s largest beauty and cosmetics company.

While many might automatically think of brands such as L’Oréal Paris, Gilliam explains that this doesn’t even scratch the surface, with cosmetics names spanning the consumer products, L’Oréal Luxe and professional products divisions:

This diversity of brands calls for a diverse make-up (no pun intended) of staff across the UKI region. The 4,800-strong workforce includes head office staff, field employees such as salespeople and educators in salons and spas, blue-collar workers in distribution centres, and retail staff in both L’Oréal own-brand boutiques and those on beauty counters in department stores and beauty retailers.

When Gilliam joined the workforce in 2016, it was what he calls an “interesting time”. The company was just about to embark on a new global cultural transformation called Simplicity that would become “number one in [his] inbox” of things to do.

At the heart of this transformation is a need to balance L’Oréal’s 100-plus-year-old heritage with being future-fit.

“L’Oréal is an incredibly adaptive organisation and there were things it was very strong at, like being very entrepreneurial, very innovative, products being made to high standards. And it has traditionally been very focused on talent acquisition and career mapping – that’s a really strong part of our DNA,” he says.

“Those were all things the business saw as important to the future, but there were also bits that were less comfortable. So there was quite an individualistic culture and heroes were rewarded and recognised individually rather than as a collective effort. Also it was maybe a bit too controlling and not giving people autonomy, and there were too many layers in the organisation.”

The beauty industry is facing a “multitude of shifts”, explains Gilliam. “The old days of our main competitors being Coty and Estée Lauder are gone. There’s now an explosion of small entrepreneurial start-up brands that are much faster, and beauty is very trend-led so speed is important,” he says.

“Then there’s the channel shift… beauty is quite experiential, so how do you manage that in an online experience? Then there’s the category shift – so discounters are becoming much stronger than the traditional retailers and department stores. And then the consumer shift – such as consumer expectations around using ingredients that are natural and sustainable.”

He adds: “So it’s almost like keeping the best of the past while adding in new elements to the recipe that make it really compelling for the future and help us continue to grow and evolve.”

One such new element has been a commitment to “great managers”, which has included rolling out leadership training. This covers – among other topics – neuroscience, coaching and feedback. The latter is something Gilliam brought over from his time in the US, a nation with a strong feedback culture.

“I think culturally Brits can be a bit reticent and we need to get people to be a bit more courageous and comfortable doing this. So we spend a lot of time training teams to give feedback – not just manager to employee, but peer to peer as well.”

“If you’re very structured, very engineering, very boxy then this isn’t the place for you,” Gilliam says. “We often have people who have not been brilliantly successful in other companies come here and thrive as the culture is a little bit unique.”

Part of getting the best entrepreneurial talent means becoming more diverse, Gilliam asserts. Which is why he has taken a stance that L’Oréal’s mission, ‘beauty for all’, must run through the internal workforce as well as external branding.

“FMCG as a whole has not been the most attractive destination for people from certain backgrounds,” he says, acknowledging that the industry has long targeted white women as consumers.

“From a business perspective, we’ve done a really good job with creating more inclusive campaigns and products that reflect the diverse population of the UK,” he says. “The challenge from a people perspective comes back to attraction, and we have to be disruptive.”

Being disruptive also means shifting the perception that the right talent is only people who know their primer from their BB cream. “If you’re a beauty obsessive who knows the top influencers then great. But then if you’re not but you know all about profit and loss then also great. We don’t want people who are all the same.”

When it came to gender diversity and inclusion, Gilliam quickly realised that L’Oréal has “the opposite challenge to lots of organisations. Our head office and field population is about 70% female and the retail staff is 93% female,” he says.

“So one of our challenges is to get more men into the business at junior and mid-levels… perceptions start really early, so we have to show that there’s fantastic careers for both men and women in L’Oréal, the beauty industry and in FMCG more generally.”

So Gilliam set about taking a more innovative approach to recruitment. “We’ve tried to flip the logic on how we solve this problem, as if you put a bunch of HR and recruitment people in a room they’ll solve the challenge in an HR or recruitment way, and that’s probably not going to work,” he says.

“We work with some of the best marketers in the country, so we sat down and did this in a very collaborative way with the digital team, corporate affairs and marketing.”

The result has been a new recruitment campaign with the tagline ‘You don’t have to wear make-up to make it’. “The test campaign targeted two groups: the achiever, which is the classic L’Oréal profile, and the wizz, so more the digital profile. The analytics showed more people watched the wizz video, so what we did was reach a whole new audience,” he says.

Gilliam has also turned his attention to reskilling the current workforce to enable them to be fit for the future of beauty. “The key thing is we want people to keep learning,” he says. “You can have a really rich career here – we’re very good at moving people around different parts of the business.”

Step forward another L’Oréal phrase: ‘The three crosses.’ “So we have cross-functional moves, cross-divisional moves and cross-border moves,” explains Gilliam. Though there is “no hard and fast rule” on how quickly an employee should switch roles, he says this is one area where the business sometimes needs to slow down.

“We have a very Simplicity phrase, ‘eat what you cook’, so it’s really important that people experience the job in full, as if you come in and do the job for six to nine months and then move onto the next thing before the consequences of the project come through, it doesn’t encourage a sustainable or long-term business,” he says.

The solution has been a programme called Entrepreneur in Residence where employees can go to work for a start-up for six months, paid for by L’Oréal, returning to the business with fresh knowledge and experiences. There is also a Be Right Back programme, where employees can pitch to go off on four weeks’ paid leave and learn something abroad.

“When we looked a couple of years ago at why people were leaving, sometimes it was that they loved L’Oréal but just wanted to have a break and see the world or travel,” Gilliam says.

“We’ve had people go off and work on plastic pollution in the Philippines, someone went to India to do wellbeing and yoga, someone went to Cambodia to help set up hairdressing training for young girls… people come back enriched and energised, with new perspectives.”

Being entrepreneurial also means accepting and allowing employees to make mistakes. And Gilliam emphasises that he and the rest of the leadership team are no exception.

“We have something called ‘F*ck up nights’, which are almost stand-up comedy-style nights where senior leaders stand up and talk about a mistake they’ve made and what they learnt from it,” he says.

It’s an idea Gilliam “stole from the German division” as he felt it would translate well culturally (“and the language is universal,” he jokes). “Those nights are really fun – it’s amazing the mistakes people have made on their way to where they’ve got to,” he muses.

While not all HRDs would happily stand up and announce their shortcomings to the entire workforce, Gilliam was determined to be part of the first night. At his stand-up he shared how a global leadership development programme he piloted in the UKI market completely missed the regional mark.

“It was a complete car crash – I had my 43 most senior people off site for three days and after the first day they were like ‘we’re not coming back’… there was 13 pages of feedback from the top leaders in the organisation saying ‘this was the worst experience of my career at L’Oréal’,” he says.

“It was a disaster. But from the depths of disaster you learn a lot.”

Beyond this he says his biggest challenge over the past three years has been trying to do too much. “This is a very Paul answer – I always have eyes bigger than my belly,” he jokes. “I can tell you all the things I want to do and there’s never enough time to do them all.”

Next up on his vast to-do list is a focus on “getting better at the everyday stuff”, which means making employees’ day-to-day lives easier. “We call it ‘Life less complicated’, because if we could just make life less complicated sometimes it would really help,” he says.

But for now Gilliam is “proudest” of how far HR has managed to drive cultural change in the last three years.

“If we play the word game... innovation and entrepreneurialism we already had and have kept. Excellence we’ve kept. Then we’ve gone from individual to team, from siloed to collaborative, from top-down controlling to autonomous and free, and from guarded to trusting,” lists Gilliam.

“The one thing that sticks out to me is that people now say it feels different to work here,” he adds.