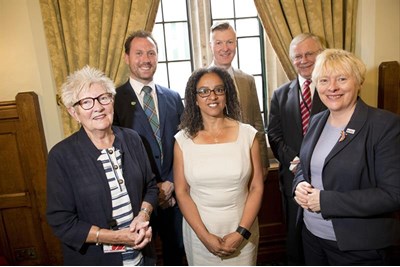 I write as one, now retired, who spent much of my career in the business of ‘helping people to help themselves’. I agree wholeheartedly that those ‘at the coal face’ are in the best position to ...

The UK’s productivity problem won’t be solved unless employees are given a collective voice in the workplace, according to Labour peer Margaret Prosser.

Speaking at the launch of a commission into collective voice at the House of Commons yesterday, commission chair Prosser asked: “How can productivity increase without listening to the people who can actually make it increase?”

She called on businesses and unions to work together on the commission to reshape collective voice in the modern workplace and find the answers to the productivity problems faced by the UK.

Prosser pointed out that the government’s industrial strategy, set out in November 2017, said little about the role of unions, management or employee engagement. She added that in excluding unions from attempts to address issues in the UK economy, employee voice is low or absent.

Speaking to HR magazine at the commission launch, Prosser said: “I think there’s an attitude in business – and encouraged by the government – to make the fastest buck as quick as we can.

“Workplaces that are successful are those where people work collectively on things,” she explained, adding that employers that don’t listen to their workforces are “missing a trick as the workforce knows what’s going on and what works for the business”.

Mike Clancy, general secretary of union Prospect and vice-chair of the commission, agreed that “the low private sector coverage shows the territory we face and that we’ve got to do something about it”.

He pointed out that it’s not just the gig economy where employees are struggling to have a say, adding that if employees are given “voice on micro issues in the organisation then why not a voice on the macro issues as well”.

“Businesses may want employees to contribute to job design but then you also need to give them a say in the strategic decisions that affect their job security,” he said.

The economy is more vulnerable now because of Brexit and the next generation of technology insertion, he added, pointing to an imminent need to collectively address these concerns. “HR often thinks unions are a pain but HR also doesn’t want to be in a position where the last union turns its lights off and there’s no collective voice,” he said.

Unions and HR must instead share agendas and objectives and become partners for the benefit of all parties, Clancy told HR magazine.

“The decline of union influence has at times also been reflected in the decline of HR’s influence because they both look after people issues,” he explained. “Issues in the economy need to be addressed by the reappraisal of bargaining of unions and this will stimulate the influence of HR too.”

The commission has been launched by Unions 21 and Prosser to explore how the role of collective voice at work can help overcome low productivity, falling wages and the advancement of industrial strategy in the UK. It is cross-party with engagement from unions, academics and employers and begins formally in September for 18 months.

I write as one, now retired, who spent much of my career in the business of ‘helping people to help themselves’. I agree wholeheartedly that those ‘at the coal face’ are in the best position to identify – and implement – productivity improvements. Ideally, the more productive businesses become more competitive, and the same number of people can make and sell more goods / services. However, there is the possibility that with stagnant sales, fewer, more productive staff can meet demand, and if the excess staff cannot be redeployed they have to go. This is made easier by employing ‘agency staff’, but no less devastating for these people. My experience with unions is that many (perhaps understandably) cannot condone redundancies, and so resist all attempts at improving productivity. Foer example, I spent some time at Vauxhall’s Luton plant where management invited workers to identify improvement opportunities* and personnaly take a hefty cut of the annual savings. This was dubbed ‘The Shop-a-Mate’ scheme by the union which condemned participation. The plant duly closed in 2001. Fortunately there was a different mind set in the adjacent truck & van factory which has survived through several owners and is currently hoping to expand – although Unite seems circumspect about this. Frankly, I always found that the vast majority of people want to do a fair day’s work for a fair days pay and see some appreciation for their efforts. Some need more reassurance than others to voice their ideas and try things out, but are happy to go home having achieved something new / different as well as doing their daily round to put money in the till. They often have more invested in the business – in terms of time and loyalty - than many of those in charge or who happen to own it at some point. Many union people are the same, but are prepared to be more outspoken (for good or ill), which discomforts those in charge. I’ve worked with some union people who I would have put in charge of the business! Unfortunately many union people see their role as critics of management which is rarely productive, even where justified. *e.g. one operator’s job was to fit windscreen wipers. She had more than enough time to do this and was able to work back up the track …even fitting wipers before the windscreen, despite the fact that it made other people’s job more difficult. Then she’d go off selling raffle tickets or something until everyone else caught up. At a German car factory (again going back to the 1990s) operators played chess at trackside. The Works Council (union, in effect) took the view that as long as the operators did their job, that was fine. It wasn’t their fault that sales were down and the track was running slowly!