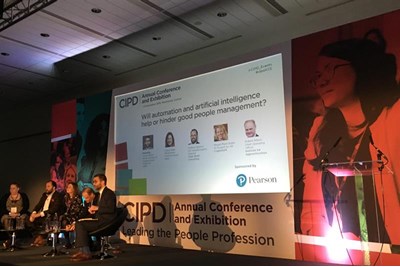 The language of artificial intelligence (AI) and automation is misused and incites fear among the workforce, according to a panel on day two of the 2018 CIPD Annual Conference and Exhibition.

Speaking during a panel session called ‘Will automation and artificial intelligence (AI) help or hinder good people management?’, Andrew Spence, HR transformation director at Glass Bead Consulting, said that there’s “fear-mongering” in the rhetoric that “the robots will take our jobs”.

“The word robot comes from the word ‘robota’, which means slave so the language puts fear in people,” he said.

But the “term AI has a naming problem in itself”, he continued, pointing out that there are multiple ways people would define the word intelligence.

Cheryl Allen, HR director transformation at Atos, agreed that “people use AI as a general [term] and so many words are used interchangeably”. “Do people really understand what big data means?” she said, explaining that this is an example of a technical term “banded under AI” that actually has “different implications”. While HR doesn’t need to be the expert in technology the function “does need to understand the terminology”, Allen said.

HR will often “seize terms like AI and robotics to give complexity and credence”, but “we’re in danger of getting an allergic reaction in HR by applying tech words – that are important in the tech industry – but can alienate people in other sectors”, explained Robert Nitsch, chief operating officer at the Institute for Apprenticeships.

This is why the army is careful to use terminology that resonates with people “or they’ll reject ideas”, he said. “So in the army we use the word 'digital' as it diffuses some of the atmospherics and takes managers with you whereas some language wouldn’t,” he added.

The panel explored how technology is currently being used by HR to manage people. For AI analyst Megan Marie Butler, HR predominantly uses AI for talent acquisition, but there are significantly fewer products in HR than in other functions such as marketing and sales. It will have more of a role in job descriptions, predicted Spence, giving the example of AI used to “reduce biases” in hiring and recruit the right people.

At Atos the HR team recently introduced its first robot, which Allen said “takes away the repetitive tasks". “We’ve been able to drive efficiencies [with the bot] but also use this efficiency to reinvest in the hot skills in HR,” she explained.

However, Nitsch said he “look[s] at it differently”. “I’d be wary of adding the efficiency tag to it,” he warned. “I’ve seen it get rid of the tyranny of process and provide management insights – those are the things that are positive. The bits we need to guard against are the degrading of human contact.”

Nitsch said that there’s a “danger leaders become data-dependent”, and encouraged them to balance being “data-savvy” and maintaining “human skills”. He pointed to the example of US army trials using a hologram for welfare support. “This led to a 35% increase in the number of people being prepared to declare a welfare issue as they are declaring to a hologram not a human”, but there “needs to be a systems approach as the follow-up will probably need to be human-driven”. “There’s also the danger of promising something you see in a computer game that you can’t actually deliver,” he cautioned.

When asked whether there is a danger in stripping out human judgement, Butler said “that’s exactly the type of question HR needs to be asking”. “AI should be used to drive better decision-making” but HR still has a responsibility to conduct due diligence, she added.

Ethical concerns were also discussed as potential dangers. “If a driverless car is going to hit a cat or a dog it has to be built into the algorithm which it should hit. So there’s an ethics questions with AI where human values need to be brought in,” said Spence. He also raised the issue of many AI machines and bots being gendered as female: “we need to think how we are projecting our current values onto the technology, which is being created by the fellas in Silicon Valley”.

The panel went on to discuss the need to reskill the workforce for when low-skilled jobs become redundant through automation. Allen said that at Atos “we have been very explicit and open with employees that the world is changing and our tasks and roles are changing”. It has set up a development programme called Future Fit to help “bridge legacy skills to new skills”.

“We’ll always have the option of many skills and tasks,” said Butler, citing three skills that will be critical for the workforce in this future: digital literacy, soft skills, and a growth mindset. “Lifelong learning will be more and more important to Millennials as they will need to change their skills every few years as things change,” she said, adding that she sat on "on the fence" when it came to creativity, as she's "seen some beautiful pictures done by AI”.

Nitsch highlighted the need to develop skills in managers, including “self-awareness, critical thinking and emotional intelligence”. “I see the change as being more than change management, it’s about culture,” he said. “You’ll have reached a utopian state when you’ve changed the culture.”