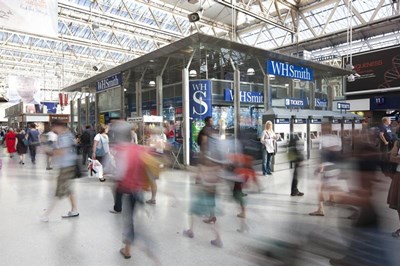 Not many will realise quite how long WHSmith has been around. The chain started life as a newspaper shop in 1792. Henry Walton’s son inherited the business and renamed it WH Smith & Son before overseeing a rapid expansion in train stations, starting with Euston station in 1848. The chain now has 1,300 shops in 24 countries and is celebrating its 225th anniversary this year. This will involve the 1970s cube logo being revived on carrier bags, and biscuit tins in the shape of its old storefronts will also be on sale.

Behind the scenes there’s a much more profound anniversary project underway. It all started when an employee approached a couple of executives, including HR director Anthony Lawrence, with an idea. “A colleague had experienced an event that made them think about what they could be doing to better support other people’s mental health, both in their private life and from a work perspective,” explains Lawrence.

This struck a chord with Lawrence, who reports a history of mental illness in his family. It also resonated with CEO Stephen Clarke, who the colleague had also approached. “She didn’t know, but she was pushing at an open door with me because I have mental health issues in my family: my mum and my husband,” Clarke related in a rare interview in The Telegraph, explaining his husband has bipolar disorder.

“So I said carry on doing the work, come up with a proposal, any help I can provide I will,” recalls Lawrence. “One in four people are affected by mental health issues, one in six in the workplace, so it’s a big topic,” he adds.

The colleague came back singing the praises of Mental Health First Aid (MHFA) England, an organisation originating in Australia that came to England in 2007 and trains people to become mental health first aiders.

The rationale is that mental health should be seen as just as important, and dealt with in just as much of a straightforward way, as physical health. Those trained are intended as a first line of defence in exactly the same way physical first aiders are.

MHFA trains a lot of people already working in some form of counselling, or HR- and wellbeing-related fields. But it’s increasingly keen to target other workers, specifically line managers. Notable examples of companies already doing this include Unilever, where 1,400 line managers have been trained, and EY which has trained 500. Other organisations taking part include NHS England and, in the construction sector, Skanska, Lendlease and Crossrail. WHSmith decided it was committed to following suit.

This has so far involved training six, soon to be seven, individuals in the business to a mental health first aid trainer standard. These people are now delivering training to the 130 fully qualified mental health first aiders the organisation will soon boast, and the 1,100 line managers who will all eventually have undergone a half day’s ‘taster’ session to equip them to be a very first line of defence.

“Some businesses will send everybody to MHFA for training, but we chose not to. We decided we wanted the people delivering the training to understand our business,” says Lawrence, adding that cost was also an important factor. “We didn’t have any problems getting volunteers to be first aiders,” he continues. “We agreed we’d support the training but they had to do homework, and they volunteered to do that in their own time. So there’s a balance of Smiths giving time and the individuals giving time voluntarily.”

Lawrence explains the value of training store managers: “It’s alerting [them] to signals that they could have missed previously, and having an appropriate conversation with a colleague to say: ‘are there any issues; can we help?’”

He adds that a crucial element of the training stresses that neither the line managers nor the 130 receiving the full two days’ training are in any way fully qualified mental health professionals. Rather, they’re there to start the conversation then refer the person on to someone who is, such as a GP. “One of the things we’re very clear about is that these conversations are confidential,” says Lawrence. “[First aiders] are not to take any notes, because if an individual feels that it’s not confidential they won’t have the right conversations.”

Also crucial has been advertising who the trained first aiders are – particularly so that people can find someone they don’t work with if they prefer.

WHSmith has set up groups where first aiders can support each other and share knowledge. “We have a monthly first aiders’ voice conference where people are sharing anonymously. Because we’re still learning as we go along,” says Lawrence. “Some of the topics they’ve undertaken are quite heavy and clearly they need the support.”

The key challenge has been a logistical one, says Lawrence: “That is a big undertaking. There are 1,100 store managers in 1,100 different locations… So it’s just a big Gantt chart of getting people into the right locations at the right time.”

Tied into this project have been charitable activities also linked to 225th year celebrations. “One of the key things MHFA England talks about is the five things that produce good mental health, and one is giving back to the community,” says Lawrence. So the business is engaging in lots of fundraising activities, ranging from Tough Mudder obstacle races to bake sales, with the aim of raising £2 million for Cancer Research, the National Literacy Trust and Mind.

“Anecdotal feedback we’ve had is that people are very proud Smiths is focusing on something so important and dear to them,” says Lawrence. “Lots of them have experienced or are experiencing mental health issues within their circle of friends or family. So it’s a very relatable topic.

“The people who have attended the training feel it’s valuable, and that the training is getting them thinking,” he continues. “The line managers feel it’s very relevant; not only for mental health but in making them a better line manager. It’s having the ability to really listen to and read people. Sometimes line managers may be a little too busy, so it’s given them just a bit more in their toolkit.”

The business is not planning to measure the ROI of the quarter million-pound investment made in commercial terms. The rationale behind the first aiding programme was that it was just the right thing to do, says Lawrence.

This initiative constitutes WHSmith’s first foray into a really concerted wellbeing initiative. Some might find this a surprising place to start but Lawrence is adamant it’s right for the business.

“We do the right thing when it comes to things like physical first aiders. But this feels more relevant to what our colleagues are talking about. It’s very topical at the moment,” he says. He is determined this won’t be a flash in the pan though.

The company will be using conferences, talking circles, and other feedback forums to assess as it goes what’s working and where to take things next. And Lawrence hopes it won’t be a short-lived buzz elsewhere either.

“I hope it’s not just a fad that then dies because it’s not fashionable anymore,” he says. “I can’t think of why any organisation wouldn’t want to do this. If it has employees it should be doing this.”