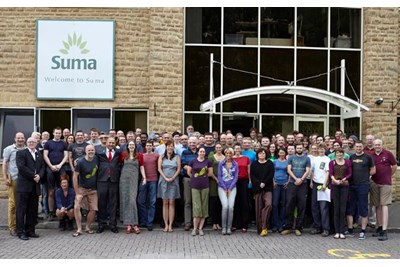 And the business is very secure and owned by the members themselves. Ive just retired after nearly 35 years in Suma. Imagine the personal growth and development possible in this set up. People come ...

Number of employees (or members): 161, and seven 'trial members' currently

Number in HR team: Seven (though no member works in the same department five days a week)

Suma Wholefoods is the UK’s largest independent wholefood wholesaler/distributor, specialising in vegetarian, fairly traded, organic, ethical and natural products. It was founded in 1975 in Leeds and was run initially as a conventional business. When founder Reg Taylor sold the business two years later to seven employees they decided to run it as a workers’ co-operative. Today Suma has more than 150 ‘members’ and is enjoying steady growth of 3% to 5% year on year.

A burgeoning gig economy, effective governance and decision-making, and pay transparency are all key challenges faced by today’s corporates. But these are issues, says Jenny Carlyle, Suma member and personnel officer, that workers’ co-operatives cracked 40-odd years ago…

When Suma’s founding members transformed it into a co-operative back in 1977, many of its founding principles were set down in a constitution. However, “a lot of the people stuff isn’t in the constitution because it felt too obvious. A lot has evolved out of informal principles that we’ve then enshrined in policies and procedures as we’ve gone along,” Carlyle reports.

At Suma everyone gets paid exactly the same: £40,000 a year. “Lots of workers' co-operatives operate equal pay but some are more equal than others,” comments Carlyle. “Some have bonuses for length of service. We do have a bonus system where we distribute profits but it’s worked out pro rata on the number of hours worked.”

This enables a principle crucial to the Suma way of working: multi-skilling. While members work principally in one area “very few people do the same job five days a week,” explains Carlyle, and “most will also do some warehouse jobs in the week, so something like picking, or loading trucks, or working in the fridges or freezers.

“You can imagine what a nightmare it would be to say ‘you’re on one rate for picking in the warehouse, you’re on another for being a member of the sales team'. Working out how to pay people for a week’s work would be impossible,” she explains, regarding why equal pay is so crucial.

‘Multi skilling’ enables collaborative democratic decision-making, as all members have at least some experience of every area, and therefore holistic knowledge to base decisions on. “We have a general meeting where all the big business decisions are made; it’s one worker one vote,” reports Carlyle.

Underpinning this all is the expectation that members will ‘self manage'. Suma’s recruitment process is geared around finding those happy and passionate about talking to people and finding information for themselves where a decision needs to be made, she explains.

“Self management is written into our job descriptions and how we train new members,” she says. “We encourage everybody to ask questions, whether they’re here as a short-term worker, whether they have a lot of experience or are fresh out of university… and people are pretty good at finding the information they need to inform themselves.”

One of the most obvious benefits of multi skilling is when you unexpectedly need all hands on deck. “It’s great to have the flexibility where if there’s a crisis we can move everyone to that area,” says Carlyle.

But the morale boost such variety gives members is just as vital. “We often say there aren’t many jobs you’d want to do five days a week; even fun things get boring and repetitive,” she says. “Variety keeps people healthy and happy. Physical activity is a nice break if you’ve been sitting at a desk for a while.”

Equal pay also boosts morale through the implication it gives that all work is valuable, and through workers never having to wonder how their pay compares to others’. “Picking the orders would be the lowest-paid job in a similar company but actually that’s our core business; if we didn't have that we wouldn’t have the rest,” says Carlyle. “So it shows we value all of the inputs to the business equally.

“Pay is only ever on the table when we’re discussing whether or not to give ourselves a pay rise, so it takes away that hassle – everyone knows where they stand,” she adds.

There is much that larger, more traditional companies could learn from this way of working, feels Carlyle. “If you’re in a leadership position knowing the work on the ground and increasing your knowledge in that way is always good,” she says. “Since the financial crisis people have been questioning hierarchical business structures, because how can the big boss at the top know everything that’s going on?

“So lots of businesses are now putting an awful lot of work into empowering shop floor employees so they can feed information back up the chain rather than it coming top-down.”

“All of that is the stuff we’ve been doing for years; it makes us laugh!” says Carlyle. “We think: you all told us we were a bunch of useless hippies 20 years ago, but actually you’re now using our model…”

And the business is very secure and owned by the members themselves. Ive just retired after nearly 35 years in Suma. Imagine the personal growth and development possible in this set up. People come in knowing how to drive a truck and eventually know every skill necessary to run a business and some more besides. How does Suma afford these wages? By sharing the profits equally and having super engaged workers so the business is incredibly well run and effective at generating wealth. It's simple really.