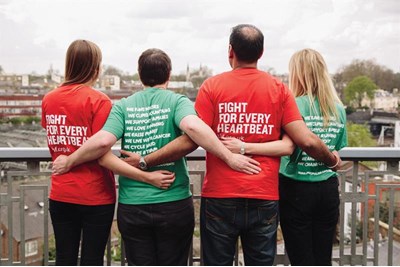 The British Heart Foundation (BHF) and Macmillan Cancer Support are two of the UK’s largest healthcare charities. They fight two of the biggest killers our population faces.

With 3,600 staff and 25,000 volunteers BHF is the largest independent funder of cardiovascular research (coronary heart disease is the UK’s biggest killer) and, thanks to its extensive network of shops, the largest charity retailer in the UK.

Macmillan employs 1,800 people, alongside 20,000 volunteers nationwide. There are 2.5 million people living with cancer in the UK and in 2015 5.8 million people accessed support from Macmillan.

“There has never been a time where charities have been under so much scrutiny around fundraising and what we are doing with our donors’ money,” says Kathy Taylor, executive director of people at Macmillan. “We have a duty to look at where we can make efficiencies.”

The pressures the charity sector is under also means good leadership is essential to sustainability, adds BHF director of people and OD Kerry Smith. “We have an ambitious strategy and want to be a world-class charity, but to do that we need to focus on our leaders,” she says.

And while both organisations had good internal leadership development, neither offered a graduate programme to bring in bright young talent. “It’s all well and good ensuring your existing talent is there, but how do we generate a pipeline of talent for the future?” Smith says. Taylor adds that the third sector can struggle to attract high potential young talent. “There’s a perception that [working in charities] can be a second choice, but it is such an amazing career,” she says.

Facing this cocktail of challenges, the two HR directors each decided the best approach was to launch a graduate training programme. But rather than work separately they resolved to collaborate on the same initiative. “We thought: ‘Hold on a minute, we are two major charities, we can work together’,” recalls Smith. “We are operating in a similar space, with a similar ambition, without being in competition. How could we collaborate more?”

“There’s quite rightly an expectation from the public that charities join up on things where it makes sense,” adds Taylor. “There’s a lot of criticism about charities going after the same pound. If behind the scenes we can collaborate we are giving better value for money.”

“It’s all well and good us HR directors saying: ‘We must collaborate’, but it’s not a natural thing for two organisations with strong L&D and recruitment functions, both with their own views,” Taylor points out, adding that getting the right framework in place was “a lot of work” for her and Smith’s respective teams.

Critical to success was “pretty active sponsorship” and “giving explicit permission to compromise on some stuff”, Taylor says. “There was an element of ‘well this is how BHF does this’,” adds Smith. “But it’s about compromise, a bit of give and take. This is something special and working together to offer candidates something they would never get anywhere else was the driver for everyone and helped us iron out those difficulties along the way.”

The result of the teamwork is a two-year graduate scheme for four people (out of the 850-plus applicants), currently in its pilot year and badged ‘GradUnique’. Two graduates are working in Macmillan for a year (in fundraising and policy and impact) and two in BHF (in fundraising and marketing). After a year they will swap organisations. At the start of the scheme the four graduates spent a week doing an induction programme in both organisations, learning about everything from delivering CPR to how to speak to someone with cancer. And every quarter the four come together for shared development, delivered by L&D teams from both organisations, on common leadership skills like project management or negotiation.

“It took a little while to work out the model: were we going to have a shared employment arrangement?” says Smith. Ultimately, rather than a tricky shared contract, each organisation employs two graduates and seconds them to the other for a year. “It helps that our T&Cs are pretty similar,” Smith adds. “As two big organisations that are attractive to similar people we need to be offering the same sort of benefits packages.”

At the end of the two years the graduates are guaranteed a role in either organisation at management level. The question is: which will they choose? “It will be their choice and I’m sure at the end of the two years they will have a view on where they would like to spend their career,” says Taylor. “Some of it will depend on who has the appropriate vacancy, but we are relaxed about it. This is about having to compromise and get over ourselves a bit. If they all decide they want to go to BHF that’s fine; we will have done our job. We might not end up with these graduates, but we will have brought four talented individuals into the third sector, and that’s the bigger agenda.”

While still in pilot stage, the programme is proving to be a success for both organisations and applications for its second year have just opened. “It was an education [for managers], but the second time round it will be easier,” Taylor says. “Now it feels so successful everyone wants a graduate and I have a queue of people,” Smith adds.

During the application process the collaborative nature of the scheme and the opportunity to work across both charities was a definite draw, Taylor says. One of the successful graduates, Anna-Sophia Warren, who is currently working in the marketing team at BHF concurs, saying: “I really liked that the scheme was with two different charities, and that both charities are really well-known, as I thought it would give me a really good grounding in the charity sector and insight into how different charities work.”

Both Smith and Taylor are considering tweaking the programme as it evolves, such as moving the graduates more regularly and putting them in areas they traditionally struggle to recruit for. “It’s about giving them that understanding of how big organisations work and how to work across them,” Smith explains.

The measure of success will be, at the end of the two years, having “four capable junior leaders to take up key management positions”, Taylor says. But looking forward, both charities have big ambitions to grow the scheme to others in the third sector, perhaps even beyond to the commercial sector. And they both welcome hearing from HRDs at organisations interested in collaborating on future graduate schemes.

“We are trying to set something up that is achievable and start a snowball effect: collaboration is the key,” says Smith. “Some of the smaller charities won’t have the resource and won’t have an L&D department, but we can support,” Taylor adds. “We’ve done all the legwork and don’t mind sharing. If we can improve the talent pipeline into the third sector that has to benefit all the people we support. The more talent we can get the better service we will be able to offer.”