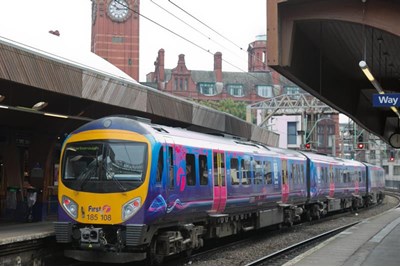 First TransPennine Express is an intercity service operating between key cities and towns in the north of England. Trains run across the Pennines, linking Newcastle, York, Leeds, Doncaster, Hull, Sheffield, Manchester and Liverpool. These cities are also connected with the Lake District, Lancashire, Cumbria, Scotland and Manchester Airport.

There aren’t too many organisations faced with the prospect of a complete change in ownership on a fairly consistent basis, but with no idea until the change happens of who these owners will be or their plans for the business.

But this is exactly the climate train company First TransPennine Express operates in. Currently run by First Group and French firm Keolis, the organisation faces this prospect very soon, with the contract to run the franchise due for renewal in April 2016.

“We have an idea of what the next operators will want to do from the government tender document, which is public, but obviously we don’t know exactly how they’ll want to do it,” explains HR director Sue Whaley, who says what’s needed at the franchise is a resilient, agile leadership team.

There are also perhaps not many industries quite so driven by rules and procedures as the railway sector. This again presents a leadership challenge, says Whaley.

“The railway is a very rules-driven environment, which is what’s necessary to make it effective and keep it safe. And many have worked in the sector for years so they don’t know any other way of working,” reports Whaley. She says that the challenge is to encourage a more creative and innovative mindset.

When the organisation discovered (through an EFQM Excellence Model assessment back in 2010) that it wasn’t scoring highly on leadership, it decided to improve the situation by taking a more holistic tack. It decided in fact to roll out its new leadership programme to everyone in the business.

The first step was to carry out a diagnostic exercise with provider Azure to survey staff at all levels about how they were being led. Then a programme was designed around this and the challenges the organisation faced: namely the agility and resilience challenge mentioned above, and the more immediate issue of growing customer demand, with 25% more services to schedule on the network.

The executive team were the first to undergo coaching and the two-day programme, with this then rolled out to all line managers, then to all support staff.

“Rolling it out to everyone is important because in the railway sector you have technical experts who might work in a control room. They’re selected for their technical skillset not necessarily their ability to work with others,” explains Whaley. “Yet they have a massive impact on many of our staff. Conductors will speak to the control room and how they’re spoken to will have an impact on how they feel about their job and how they do their job.”

She adds: “So we recognised everyone has this leadership shadow they leave behind. Everyone needs to be able to influence others and get them to buy into what they’re saying. We wanted people to think more broadly about the business outside of their silos. We want to empower staff to give them the confidence to make changes.”

A significant rise in employee engagement is a clear indication of the leadership programme’s success, says Whaley. “We’ve had a 26% increase in driver engagement. They’re the hardest to reach group across the industry as they’re typically highly engaged with the railway sector but not with their company necessarily,” says Whaley, adding: “But their behaviour really matters, both in terms of other employees and customers. It might be that a disengaged driver is not considering how the speed they're driving at is making the journey uncomfortable for customers, for example.”

Customer service is extremely important to First TransPennine Express, explains Whaley, with strong scores here also testament to the leadership programme’s effectiveness. “Sixty per cent of our passengers are leisure-based so you have to remember the experience is part of their holiday,” she adds, highlighting the success of other initiatives geared towards this, including advertising conductor positions as ‘customer service professionals’ to attract a different skillset.

Whaley points to the specific challenge of maintaining strong service in the face of a rapidly expanding Manchester to Leeds connection as proof of the programme’s success. “It’s quite common for the PPM [public performance measure] to fall when a company increases services on an already busy line,” she says. “The industry expected it to take 18 months to get back to previous levels of performance but we achieved that in six.

“That was the result of all teams working to solve the problem by thinking about doing things in different ways,” she says. “People were saying for example ‘is there something we can take off the control room to help them focus on that?’ People were really working together.”