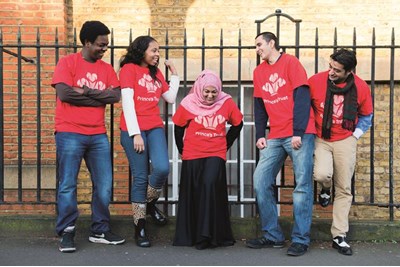 With a new HRD setting out a bold vision, HR at the Prince's Trust has started on a journey to be more strategic

The Prince’s Trust is a charity that helps vulnerable 11- to 30-year-olds. It provides training and financial support to young people leaving care, with mental health issues, from disadvantaged backgrounds or who’ve been in trouble with the law. It has helped 825,000 people, returning £1.4 billion to society over the last 10 years (based on the ROI of getting service users off benefits, reducing offending and re-offending, and helping them at school).

The Prince’s Trust was a well-established, highly respected charity when Martyn Dicker joined as HR director in 2016. The pride and commitment employees had for their work was clear. However, he found that the HR function was viewed as reactive and operational thanks to large volumes of work and cumbersome processes. The wider organisation liked working with the team, but didn’t grasp how a more strategic HR offering could add value.

“I arrived and inherited a team that despite some reasonable individuals within it just didn’t have a clear sense of direction, and of course if the HR team don’t then the organisation doesn’t,” Dicker explains. “There was a real absence of a clear strategy.”

As he settled in Dicker began to question why – despite having fantastic people, consistently delivering results, having a powerful brand, and reasonable resources (for a charity) – the organisation didn’t have any particular goal to be the best at what it does, in the same way private sector businesses often do.

“I thought we should set ourselves the target of being the greatest organisation on Earth, which of course… got people talking. Why not be as ambitious for us as an organisation as we are for the young people we help?” he says.

The first step was to excite and empower the HR team around what would be a lot of work, and some quite considerable changes. “They were doing a lot of day-to-day operational well but I was trying to remove the shackles so they could think in a different way and explore things in a slightly more ambitious way,” says Dicker. “They were nervous so I said let’s start with the vision; what are we trying to do? If we create enough interest and momentum behind it the rest will come.”

He was clear though that he didn’t want this vision to come at the expense of the team’s work/life balance, and that they should speak up if they felt their wellbeing was affected.

It was then time to gauge interest among the wider workforce. Just a few months after joining Dicker got the opportunity to talk to all the employees at conferences throughout the country. He explained that under a new people and learning strategy he wanted the organisation to be a place where: staff can be themselves, are told what’s really going on, their strengths are magnified, values are lived daily, the work is rewarding, and ‘stupid’ rules don’t exist. This vision was well-received.

Dicker then needed to set out what this vision would look like for the Trust more specifically, and bring senior management in. HR and learning and development were brought closer together, and considerable time was spent consulting on what interventions would make the biggest difference. This all happened quickly because “there’s nothing worse than someone making all these bold statements and exciting everybody about the potential and then six months later there’s literally nothing”, Dicker says.

Gradually 10 themes started to emerge. Dicker repeatedly took these back to the senior management team, and engaged with staff through mediums such as employee forums and Web chats. “We went through a number of revisions to make sure that we weren’t missing things. And part of that was managing expectations because it’s not unusual for strategies like this to be fairly front-loaded, but you’ve got to be careful that you’re not trying to deliver a three-year strategy in nine months,” says Dicker.

The 10 themes decided on were: employee engagement; performance review and development; data; resourcing; reward and recognition; learning and development; wellbeing, equality, diversity and inclusion; organisational design and development; and operational excellence. All the work to condense the vision into these themes happened in a short – but intense – period: Dicker joined in April 2016 and was able to present the final strategy to the rest of senior management by September.

Senior buy-in wasn’t too difficult to get. They were already excited by the vision, and Dicker was careful to outline why legacy processes and systems weren’t working and what the expected benefits of change were.

The themes were also popular among employees, with some such as wellbeing receiving a lot of interest. HR opted to start with performance management, as Dicker believed it would have the greatest impact and lay foundations for the other themes. “I was adamant we needed to start there because we needed to know what our performance frameworks were and what success looks like [at different levels]. How do we assess people if we haven’t even articulated what good performance looks like?” he says.

The Prince’s Trust is only halfway through this three-year strategy, but so far progress is good. Annual appraisals have been scrapped and replaced with a continuous feedback and development process. Pay, reward and recognition systems have been reviewed, and the charity is currently implementing SAP SuccessFactors to improve its people data and reporting capabilities. Around three-quarters of staff recently reported that the values motivate them to work at the Trust and the same number report having regular performance reviews.

The charity has achieved silver Investors in People status, and secured £100,000 from an external source to design new leadership development programmes. Provided these are successful it’s likely this investment will be repeated each year (so £300,000 over the three years of the strategy).

Progress against the strategy is published quarterly to keep staff informed and engaged, and there are opportunities to feed back through the staff forum.

Not long after the strategy was launched it became apparent that the HR team needed different skills. Dicker introduced a business partner model, which involved restructuring and relocating the team to outside London. This was of course not without difficulties. “I had to have quite difficult conversations, but I didn’t want to be guilty of just rebranding people’s jobs [to HR business partner] and then nothing changes,” he says.

Dicker is also clear that this strategy is not a silver bullet. It will need to be tweaked along the way and at the end of the three years there will still be work to do. But he’s optimistic that it will lay important foundations. “You’ve got to be careful that you don’t use it as a straitjacket and say ‘well we said we’re doing x’… but the world has moved on,” he explains. “It’s important to keep checking in. You might have changes at board level, or budgets, so you’ve got to be able to constantly adapt.

“Once all of the changes are in place we will have embedded business partners driving the business forward, supported by a team of L&D and HR specialists and backed by a comprehensive people system that makes us far more effective,” Dicker adds.