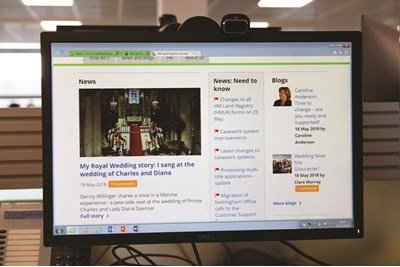 HM Land Registry used blogs to create a much-needed dialogue between leaders and employees, and transformed its engagement scores

The financial crash of 2008 marked a turbulent time for the property market and the organisations operating within it. For HM Land Registry the challenge was particularly acute.

“This took the organisation from a surplus to a deficit in just 12 months, leading to redundancies for the first time in its history and a number of office closures,” explains Caroline Anderson, HR director at the organisation.

Then there was the period of austerity in 2010 that saw HM Land Registry face a new challenge around its ability to bring in resources. Following this, there have been two public consultations on the prospect of privatisation. Not to mention upheaval at the top of the organisation: with five CEOs in as many years, poorly-communicated transformation projects, as well as an overall lack of career progression for staff.

So it comes as little surprise to hear that in 2014 HM Land Registry had an engagement score of just 48%. Within this it scored the lowest in leadership and managing change across the whole of the Civil Service, at 19%. Ranking 102 out of 102 departments in this area of the Civil Service People Survey, it was clear employees felt management weren’t listening to their voices and that they also weren’t communicating key business decisions to them. Better communication between leaders and employees was urgently needed.

While the reasons behind low engagement appeared obvious, it was important to truly understand where the root of the problem lay. “The first thing I did when I joined in 2014 was look at the survey comments,” says Anderson. “I found that employees had a strong commitment to their work, their colleagues, and their customers. This was an organisation that cared about what it did.”

Poorly-engaged staff will often create high levels of absence but this wasn’t the case at HM Land Registry, Anderson adds. It became clear that something else was going on. “With a lack of direction around any business strategy, and poor communication, there was a disconnect between the core employees and the leaders,” she explains. After speaking to staff directly Anderson found that “employees weren’t actually disengaged, they were disconnected”.

To reconnect the workforce it was first necessary to provide clarity on future strategy and to create a new vision and set of values that meant something to all employees. “Our new values came from our staff,” says Anderson. “We asked everyone ‘what are the four things you would use to describe HM Land Registry?’ and the values came from their responses.”

HR also designed a “re-induction” programme in the form of e-learning modules, followed by face-to-face sessions between line managers and their teams. “Whether someone had been here five minutes or 50 years, the entire workforce went through a re-induction that looked at the refreshed business strategy, its vision and values, and what the values meant to each team,” Anderson explains.

Central to HM Land Registry’s engagement efforts has been its approach to creating a digital voice for employees and bridging the gaps in communication via a blogging platform. The platform is embedded into the new company intranet and, to lead by example, the new chief executive Graham Farrant was the first to write a post.

“It’s important that the CEO and all the directors are visible across the organisation, so the CEO does a weekly blog and the board directors do a weekly blog on rotation,” Anderson explains. The topic can vary, but they must “be authentic, so we talk personally about our lives in and out of work”.

“One recent blog I did was on values and I included a video of my daughter speaking about the challenges of finding her feet as a new employee, a young woman, and a woman of colour in a company,” she adds. “People resonated with it because everyone needs to feel their workplace is a safe space for their values.”

Another important aspect of these blogs is that they are open to feedback. All comments must be attributable, not anonymous, Anderson explains, as “if we as leaders are going to be transparent we expect the same from employees”.

After high readership and comments on the director blogs, weekly staff blogs were then launched, providing a forum for everyone to have a voice.

“The very first one was called ‘Tea and tablets for two please’ and was a personal story about bereavement written by two members of staff who had lost their son. It was very emotional and created a big reaction,” says Anderson.

The comms team sitting within HR oversees the blogs, but has “only a light touch as it’s important the blogs are personal and that any comments – good or bad – are visible”. The blogs also run alongside face-to-face sessions, with directors encouraged to follow up with employees on any negative feedback.

Proof that HM Land Registry is now on the right track is found in the most recent Civil Service People Survey, with its engagement score having risen 12% since 2014 to 60% in 2017. Its score for leadership and managing change has reached 41%, up from 19%. This bucks the trend in the wider Civil Service, Anderson adds, emphasising that employees feel connected to the organisation once more: “As an organisation of heritage, tradition and a strong hierarchy, we’ve broken down this hierarchy through the open and honest conversations the blog creates.”

But there is still room for improvement. “This absolutely isn’t a done deal – progress can so easily be lost so we need to maintain transparency around what the organisation is doing and why,” adds Anderson.

Part of this will be the rollout of webcasts to support engagement. Through this technology leaders will be able to hold live discussions with colleagues from all offices. The organisation is also focusing on developing its leaders’ and line managers’ communication skills. Its People Survey Action Plan and You Said We Did campaign are also being used to raise awareness of the actions taken following survey feedback.

This period of change is far from over, with a new business strategy, further restructuring, and “a big programme of change” ahead. But, if the organisation can maintain the dialogue and connections it has created so far, it’s likely to be a change employees and leaders will navigate together.