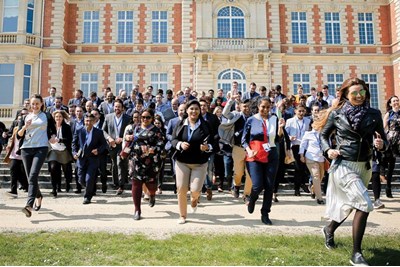 This is a one multinational company which provide good platform for learning and enhance our knowledge of latest techniques like ML data science AI.I want to thanks to Capgemini group.

Founded by Serge Kampf in 1967, Capgemini is a global consulting, technology services and digital transformation business headquartered in Paris.

Today it has more than 200,000 employees serving clients across 40 countries, with 8,000 of these employees based in the UK. Capgemini took home the award for Best youth employment strategy at the 2019 HR Excellence Awards.

As a consultancy with a key focus on technology and innovation, for Capgemini to continue to meet the needs of its diverse client base it needed to draw in the best tech talent. But, with the UK facing a widening digital skills gap, this was easier said than done.

“We’re a technology company so we’re fast-moving and pacey and need to be innovative,” says Frances Duffy, HR director at Capgemini. “We need to have the workforce of the future and to attract people into IT, and at that time [2011] there wasn’t a huge amount of people doing IT degrees – so it was quite a challenge.”

Another necessity for creating a future tech pipeline came in the form of reaching younger talent – who come with the added benefit of having grown up in a more digital age.

“We wanted to increase the number of young people coming into the organisation and grow more from within,” says Duffy. “If we could attract more young people into IT – male, female and different diversities – from an early stage we would be able to train them to do the jobs we need in a fast-moving market.”

The company needed to attract a more diverse pool of digital talent, and the school-leaver population seemed like the perfect way in.

The first move was to introduce “higher apprentices”, that is people with A-Level qualifications, onto a programme that offered a mix of experiential on-the-job learning and campus training. This was back in 2011 and pre-apprenticeship levy times, so HR had to sell the idea to the top table.

“That was an easy sell as they could see there was an excellent payback,” Duffy says. “We had a small apprenticeship programme in one area of the business already and we could see that it attracted a different group of people and that it had good retention rates.”

The harder sell, Duffy explains, was actually among the school-leaver population itself.

“There were two obstacles,” she says. “It was a new market for us, and schools are a big population to go out to. And the other thing was that apprenticeships and degree apprenticeships were quite new so they were not always seen by schools and parents as obvious choices for kids to make.”

The company set to work increasing its visibility among school-leavers and making the apprenticeship route a more attractive option. Central to this has been a school outreach programme, where HR focused on building relationships with individual schools and educational charity Ark Schools, and on supporting the world’s largest STEM school competition, First Lego League.

“Our employees go out to volunteer in the schools – and have interacted with almost 7,000 students overall [so far],” she says. “They’re very willing to go and support local schools.”

Perkins says employees find it personally rewarding, with 2% of the workforce being involved in school outreach: “I hear employees say things like ‘I went to a school like that and no-one came to my school and spoke to me, and I wish they had’.”

Social mobility was clearly a driver, with the aim of reaching disadvantaged young people who would never before have considered they could have a career in tech. Given the typically male-dominated nature of the tech industry, dedicated events for girls were a priority.

And it is the employees who have made career mistakes or come from similar backgrounds to the young people who can especially make a difference, adds Perkins.

“We say to people that someone in Year 10 would be fascinated by someone who got sacked from their first job but is now doing really well – that’s who we need to be involved.”

Then, in 2015, when the UK government started making noises about rolling out degree apprenticeships, HR ramped up its apprenticeships offering once more.

“We jumped on that as an opportunity to create apprenticeships in a field that hadn’t taken apprentices before so it gave us a greater opportunity to bring in more young people and address the digital talent gap,” says Duffy.

This resulted in the launch of the Capgemini Degree Apprenticeship programme in 2017, developed in partnership with Aston University and making Capgemini the first UK employer in the technology industry to deliver degree apprenticeship graduates.

Apprentices come away with a fully-sponsored science degree in either digital and technology solutions or leadership and business management.

Next came the introduction of the Coding Academy in 2018, a six-month blended learning experience of workshops and self-directed study for disadvantaged and refugee students, with the aim of hiring at least some into the business or onto the apprenticeship programme.

It is an approach that appears to be working. Ninety-five people have graduated from the degree apprenticeship programme to date, with 39% achieving a first and 88% a 2:1 or above; significantly higher than the proportion of people on equivalent university courses.

Strides have been made in tackling the lack of females in tech, with a 50-50 gender split achieved in the degree apprenticeship intake. And 20% of the intake can be traced back to the school outreach work, with apprentices feeding back that they never would have thought to take up an apprenticeship or join Capgemini if they hadn’t had that contact at that stage.

This new demographic is “changing the face of the business” too, says Duffy. “As we bring young people in they challenge the status quo – one of the things we’ve since changed is we’ve relaxed our dress codes.

“It’s now easier to get digital talent, and now the people who’ve been our apprenticeships are going into schools to recruit more as they’re the best ambassadors – that’s a great story, showing how they have progressed.”

It’s not a done deal either. New to 2019, Capgemini expanded its intake further with the launch of apprentices in Wales. And the business is now turning its attention to what other skills could be developed through apprenticeships.

Perhaps most significant however is its influence on the wider industry. Capgemini client Anglian Water created its own degree apprenticeship programme based on theirs, and this has led to the two firms’ apprentices collaborating on projects that will benefit the future of the UK water sector.

It’s all part of a journey to build a future pipeline of technology talent in both the company and wider society. As Perkins says: “We need to have foresight of what we need to think about in five years’ time.”

Entries are now open for the HR Excellence Awards 2020: https://www.hrexcellenceawards.com

This is a one multinational company which provide good platform for learning and enhance our knowledge of latest techniques like ML data science AI.I want to thanks to Capgemini group.