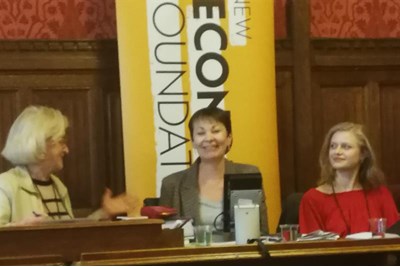 Shifting to a green economy would create many jobs, according to MP for Brighton Pavilion and former Green Party leader Caroline Lucas speaking at a New Economics Foundation event

"It is a win-win-win. If you wanted to imagine a movement that would create social justice, that could create thousands of new good-quality jobs, that would get climate emissions down, then the Green New Deal would tick every one of those boxes simultaneously. We need to set out what a just transition [to a Green New Deal] looks like in detail," she said.

Held in the Houses of Parliament and chaired by economist Ann Pettifor, the event focused on how the 'Green New Deal' could work in the UK and how it will affect the workforce.

The plan gained momentum in the UK after a number of activists in the US, led by Democrat congresswoman Alexandria Ocasio-Cortez, proposed the Green New Deal as a response to climate change. It sets out a mobilisation of resources to achieve 100% renewable energy, and to eliminate greenhouse gas emissions, through a reorganisation of the economy.

But policymakers must consider the skills and reskilling implications now, Lucas warned, adding that such a transition will work best if led by workers. "We need to think about how to transform skills and make workers part of the process, and to really imagine where those skills would be to be useful," she said. "The model in the seventies of the Lucas plan – where they took an arms factory and turned it into a place that could make products that would be really useful to people – was a worker-led process and this must be similarly worker-led. We need to get out of our silos.”

As the country grapples with Brexit a joint effort to tackle climate change could bring people together, she added: “We are at a crossroads politically, economically, and of course environmentally. Whatever happens in the Brexit chaos, what we can say is that Brexit has really taken the lid off the rottenness in the country, not least the inequalities that are sadly a feature of this. The Green New Deal is a real opportunity to bring our country together,” she said.

Also speaking at the event, policy officer at the TUC Tim Page said that the union would be publishing a statement in the Spring on what a transition to a Green New Deal would mean for workers across industries: “We need to get it right. When industrial changes take place they tend to create more jobs than they displace, but they create new jobs and different jobs using different skillsets. We need to look at the hard conversations we need to have, to ensure that a just transition can be meaningful," he said.

“We are going around the country and talking to trade union members who are at the sharp end of this, members whose jobs could disappear if we move towards zero emissions," he added. "We must make sure we are resonating with the concerns they have. I expect it to be strong on industrial strategy, I expect it to be strong on skills training to ensure tomorrow’s workers have the skills for these new jobs, and I expect us to talk about effective workers being front and centre. There are simple things we need to get right."

Page added that workers in the fossil fuel industry had been engaging well with the proposals: "People who are working in fossil fuel sectors are not in denial, they are not sticking their heads in the sand and saying this is all too difficult; they are engaging with us.”

Six months ago the Intergovernmental Panel on Climate Change warned that the world must halve carbon emissions within the next 12 years to avoid a global catastrophe. The UK government has been criticised by campaigners on its response to climate change, leading to thousands of school children 'going on strike' in March 2019 to spur the government to take action.
Comments