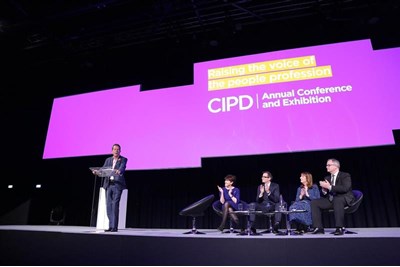 At the CIPD Annual Conference and Exhibition HRD panellists spoke on good work, the HR skillset and leadership for long-term organisational health

The opportunity for HR to impact their organisations and the good work agenda has never been so great, according to Valerie Hughes-D’Aeth, outgoing group HR director at the BBC.

Speaking as part of day two’s opening keynote panel on ‘Putting the people profession at the heart of good work’, Hughes-D’Aeth talked about the huge evolution the profession has been through over her career, urging HR professionals to seize the opportunity to exert influence by upskilling in certain key areas.

“The opportunity to influence the boardroom has never been so great,” she said. “It’s all about organisational design, working within the business with the strategic areas in mind, how do you best organise the company…?”

She highlighted that while HR professionals have always excelled at so-called ‘soft skills' the profession now needs to ensure it can bring “hard skills” to bear as well: “We tend to have been very good at people skills: empathy, compassion… but we do need to focus on some of these hard skills.”

The profession has been guilty of something of a ‘cobbler’s children’ approach to developing itself, she said, pointing to recent research that found only 9% of HR professionals feel they have the right skills to do their current job.

“We’ve done a lot for the organisation but not enough for our own profession,” she said. “The skills that I think are needed are… those around data, technology, critical thinking, problem solving…”

HR professionals can acquire these through taking on projects, “going out into the business… looking out of the organisation”, going to events, and just generally “being curious”, she said.

Speaking on the same panel was Ann Pickering, CHRO and chief of staff at O2 (Telefónica UK). She said the “really key” HR skills she needs from her team are “OD, change management… and creative reward people”. Regarding the organisation-wide skills agenda, she added: “I don’t even know some of the skills I’m going to need in five years' time.”

Pickering said that attracting people in a climate where “everyone is chasing the same talent” is about “creating the right environment” for people to work in, which should be akin to “a hotel not a prison”.

“I want people to choose to be there. If you have that mindset [as an employer] you approach things slightly differently,” she added.

In future there’ll be less of a distinction between traditional and freelance staff she said, with everyone’s employment package slightly different. Someone might demand “access to a gym, [certain] pension contributions, they’d like to be office based and ‘could you provide a laptop?’” she said, while another person will make slightly different demands again.

“I think we are going to have to get into a much more personalised relationship with people to access their skills,” she said.

Going forwards HR will have to consider very carefully what jobs to keep full time and in house, where to use contingent workers, and where to outsource, the panel agreed. Stephen Moir, executive director of resources at The City of Edinburgh Council, stressed the importance of factoring ethical, societal considerations around good work into such decisions.

He pointed out that he has a responsibility to balance outsourcing to gain cost efficiencies with creating jobs in the local community. “It’s about what jobs do we want to keep in the city? What do we need to do for the Scottish economy?” he said. “Where I’ve got 25% of children in the city below the poverty line, I need to make sure we lift them out of poverty and that there’s a job for them to come into.”

He agreed with Pickering that employees are increasingly demanding more flexible employment arrangements, particularly around working hours. “I have a £7.8 billion pension fund as part of my remit… so we compete with the big investment funds to get those people… We get them because we give the flexibility and work/life balance they really value. They’ll take a massive reduction in pay to get that.”

Hughes-D’Aeth agreed that the opportunity to outsource and automate jobs should be utilised to make work better and more enjoyable for people as well as to save money and drive efficiencies. “It’s about where you find the skills, what is the right mix, and are you making sure when you are designing those jobs that they’re jobs that will be interesting?” she said.

Also speaking on the panel was Tim Jones, group head of HR at the London Stock Exchange. He spoke about his organisation's global leadership forum and the importance to good work of leaders leaving a “long-term legacy”.

“One of the areas we talk to individuals about is: imagine if we were assessed on the success of our successors,” he said. “So rather than people being fearful of hiring 'the giants,' [recruiting them] can actually push you and get you to do things differently for your organisation.”

Placing more focus on the “long-term health of an organisation” is a significant challenge for HR professionals, he added: “It’s far harder than it actually looks because you’re shifting a mindset.”