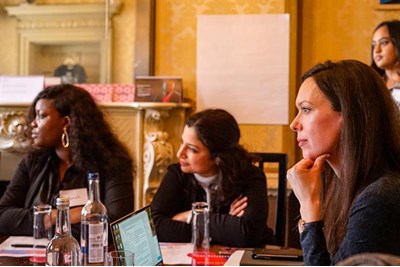 Both employers but also BAME individuals themselves must take ownership for their career progression, according to speakers at a recent roundtable

Speakers at an Equality Group roundtable, attended exclusively by HR magazine, discussed the organisation's latest report BAME Boss: Ethnic Minority Aspirations of Being on the Board, which found that more than half (59%) of black, Asian and minority ethnic (BAME) citizens aspire to be in the boardroom, but just 2% make it.

They also discussed the report's finding that 55% of BAME people had been told by a careers advisor to be more realistic in their expectations, compared to just 19% of non-BAME individuals who had been told the same.

Adabara Abdullahi, partner at MBTN Connect, shared his own experience of gaining a senior sales role at Barclays and encouraged young BAME talent to be persistent when trying to reach their goals. “I was brought up in Nigeria, and I was always told to strive for the best to go to the top. I was never ever told to be more realistic in my expectations. I didn’t go to the best university, but I decided early on that I wanted to work in investment banking,” he said.

“I got on the grad scheme at Barclays, but it was in IT rather than sales. So I found the numbers for the MDs at investment banks and called them up, organised coffees, and eventually got the job I wanted in sales. The point I’m trying to make is that yes companies need to do more, but there must also be some ownership on the individuals’ side. You have to go for it – there will always be obstacles, but if you can get yourself in front of the right people things will happen. Things might be tougher if you are black, but if you really really want it you will get there.”

However, Deborah Shorinde, an intern at BYP Network, added that professionals should be cautious about how much pressure they put on young BAME people to succeed, when the problem lies in societal and workplace systems.

“What I’m getting from this is that people should take personal responsibility for a systematic problem. I can understand that there are anomalies, like Reggie Nelson, and it’s not to say these people are not enterprising and awesome. But the fact that they have to go to such great lengths when other people do not have to do that is interesting to me,” she said.

“For us to take responsibility means to keep going to ever-greater heights. We can’t just knock on people’s doors anymore – people have already done that – we have to keep doing more and more. When will it stop?”

In competitive industries such as journalism, BAME candidates are often discounted before they’ve been given a fair chance, added Warren Nettleford, a reporter and presenter at ITN.

“I’m in the media and there is clearly a systematic problem there. I recently read a story showing that if a candidate had a black- or Asian-sounding name on their application they were far less likely to be interviewed. So they can’t even network, because they can’t get into the industry in the first place,” he said.

“I enjoy mentoring and giving advice to young BAME people trying to break into journalism. Often though, unless they’ve been to a private school, they don’t have that ‘polish’ that employers are looking for. And it sounds sad, but if within a day they can’t work out what their boss wants I know exactly what will happen. I see it happen all the time. They could be even more intelligent than the public-school candidate but that won’t matter.

“So whose responsibility is this? Is it the employer’s responsibility to ensure that they’ve got this polish? Or is that down to the individual? I don’t know, but I know that this is the reality of the situation.”

Ultimately if employers don’t tap into the BAME talent pool they will lose out on key skills, said Matt Cameron, MD of The Ocean Partnership and LGBT Great.

"I’m sure this can be applied to other groups too. The education part is really key; there should be really powerful stories that people can relate to. Businesses are missing out on these minds because they don’t know how to engage or include them, and when they do that they are dooming their own businesses.”