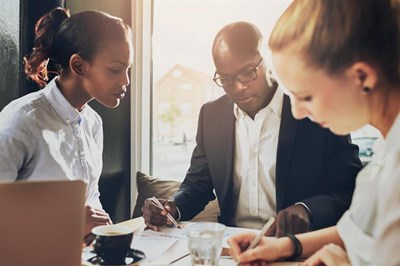 The issue is much simpler than ‘toxic cultures:” CEO’s do not have BAME progression and retention on the agenda

“People’s voices are rarely heard, but when you hear people’s stories you realise that instances of racism are not subtle," he said, speaking at a Westminster Employment Forum policy conference on 'BAME equality in the workplace'. "We heard from one employee who was passed over for promotion several times, despite being more experienced, and was eventually demoted after he complained. These stories are not rare.”

Sullivan added that racist behaviours are intrinsically linked to a lack of progression for BAME employees.

“We can bring in good policies and organisations will wonder why BAME people still aren’t progressing. The truth is that they can’t progress if they are working in toxic cultures. Racism can feel like 10,000 paper cuts, or it can feel like a boot in the face, but we won’t know until we start hearing these stories,” he said.

Sandra Kerr, race equality director at Business in the Community (BITC), added that part of the problem is a reluctance among leaders to discuss race.

“We need to be able to start having open discussions about race at work. Until people start talking about race how can they change anything? Sometimes even something as simple as having a script everyone can follow when talking about race can make a huge difference,” she said.

Kerr referenced BITC’s Race At Work 2018 survey, which found that only 33% of employees said they had senior commitment to diversity and inclusion in the workplace. It also found there had been no change in BAME representation in senior positions of organisations since 2015.

Kerr added her voice to the various groups and campaigners calling for the extension of gender pay gap reporting so that publishing ethnicity pay gaps is made mandatory.

“This country was campaigning for a gender pay gap for years but BAME women have been left behind,” she said.

“People do anything not to talk about [race], and they need to get over it. It is true that there is bias and a lack of representation. We can start having these conversations by encouraging government and employers to get behind the Race at Work Charter.”

The BITC's Race at Work Charter is composed of five principle calls to action for leaders and organisations across all sectors. An organisation signing up means them committing to take practical steps to ensure their workplaces are tackling barriers that ethnic minority people face in recruitment and progression.

The issue is much simpler than ‘toxic cultures:” CEO’s do not have BAME progression and retention on the agenda

I can honestly say, as a Bame woman who is also disabled. When I embarked on HR 10 years ago, I didn't anticipate how difficult it would be. It took seven years for me to move away from junior positions even though I had been working at a more advisory level and had to resort to FTC/interim positions to get up the ladder. When reviewing non-BAME counterparts, their journeys seemed much more streamlined. I am vocal about inclusivity and have been told my agenda is right but motivations stem from the wrong place, as I think I am one of them and not a corporate member of staff, which was worrying to say the least. If we can't share our experience, call out indifference and try to improve the situation from a wider diverse perspective as well as race. What are we even doing in HR in the first place?