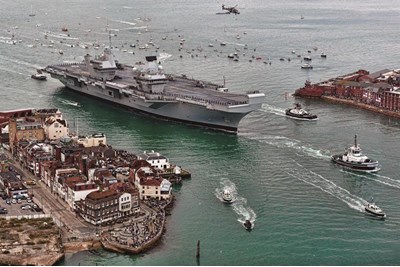 The Office for National Statistics got a valuable opportunity to observe leadership in BAE Systems, during an organisational ‘raid'

The Office for National Statistics (ONS) is the UK’s largest independent producer of official statistics and its recognised national statistical institute. As well as collecting and publishing statistics on the economy, the population, and society, it also conducts a census of England and Wales every 10 years. The ONS is part of the Civil Service and employs 3,302 people.

Meanwhile, formed in November in 1999 through the merger of British Aerospace and Marconi Electronic Systems, defence, security and aerospace company BAE Systems operates across the globe and has 83,200 employees.

Both organisations took part in one of The Whitehall & Industry Group’s (WIG) organisational ‘raids’; a cross-sector learning experience where each team learns from the other’s best practice to overcome various workplace challenges.

The development of leadership talent is key to the success of the ONS. But there are specific challenges for those in middle management. “We’ve got a focus on strategic leadership, and the middle is vital to getting the messages both up and down in an organisation,” explains Julia Carr, head of learning and development at ONS.

This has become especially important for the organisation over recent years as it’s embarked on a transformation programme, partnering with the government to use wider sets of data and introducing a new campus. This change project has involved dealing with new colleagues and new stakeholders, as well as making sure those in the original teams continue to feel valued and motivated.

“What we wanted to do was think about how leaders at the same sort of range or grade in another organisation lead. We wanted to look at the different sorts of strategies they were implementing to give us a really fresh perspective,” says Carr.

With the assistance of WIG, Carr set about designing a new leadership programme for ONS’ grade six and seven high potentials – those in positions in the Civil Service just below director and secretary level in teams.

“I had a conversation with one of our director-generals who was very keen to get a corporate high-potential programme,” says Carr. “We have lots of leadership programmes, and we tap into the Civil Service talent streams. I designed what I thought this leadership team should look like, and then got in touch with The Whitehall & Industry Group because I knew that it has an interesting twist on things.”

The most recent cohort of mid-career professionals completed an internal leadership programme, part of which included WIG’s organisational raid. This involved visiting one of WIG’s private sector members to experience its approach to leadership, communications and employee engagement, particularly during periods of transformation.

The ONS was teamed with BAE Systems at its Portsmouth naval base. While much of this was top security-clearance-access only, the cohort of 20 was able to see the building of the Type 26 frigate, the UK’s world-class anti-submarine warship.

Carr admits that she was intrigued at first at being paired with BAE Systems: “It was definitely an interesting choice. This was obviously somewhere very different to us. There’s a huge difference in size; it has around 83,000 staff whereas we have around 3,000, so that alone would mean that it operates differently.

“BAE is seen as ‘behind the scenes’, but we know that it has a huge amount of influence and experience in creating talent change and culture,” Carr adds.

Indeed WIG knew the two organisations might have more in common than they initially thought.

“BAE Systems and the ONS are interesting in that they’re both dealing with specialist staff – people trained in data and as statisticians – although they may operate in a very different way,” says Roy Johnson, future leaders programmes and organisational raids manager at WIG.

“By looking outside of their organisation staff who take part in the raids are able to benchmark what they do and understand why they do it.”

The day started with the opportunity for everyone within the team to lay out exactly what they wanted to get from the experience. It was then broken down into a series of workshops, covering collaborating across the organisation, leading from the middle of the organisation, and engaging staff in transformation.

Johnson explains that the opportunity for the ONS team to be away from their usual office environment was invaluable. “There’s definitely something really important about getting people out of the office. There are barriers and restraints that you might not even be aware of if you’re stuck in the same place,” he says.

“If they’re somewhere completely different there are not the same distractions. It would be easy to go to an office and discuss the transformation and engagement process, but it would not have the same effect. By physically going to another very different organisation’s place of work it forces you to look at things from a perspective that wouldn’t have been available to you.”

For ONS that meant BAE Systems offering frank open views on what its own transformation programme had meant for the business.

Carr says that the raid led to a wealth of insights for ONS participants into how to best lead their organisation, and a strong understanding of how to steer colleagues through change.

“It was exactly as we hoped. One of the participants said that they had rolled out reverse mentoring as a result of working with BAE Systems. But aside from the practical takeaways, our staff learnt a lot about leadership on a broader basis too.”

While employee engagement has always been a priority for HR at the ONS, the team learnt that part of strong leadership involves accepting that engaging every individual within a team is impossible, Carr adds.

“One of the big things our team learnt is that not everyone can feel excited and engaged all the time. Some people will feel frightened, others will feel invigorated. We put a lot of emphasis in HR on engagement, but we need to accept that that won’t always be the case.”

Crucially the staff learnt that being honest about sharing what hadn’t gone to plan within their organisation was especially important: “We always say to staff who go on the raids that they will gain the most from the experience if they are able to talk about what has gone well as well as what hasn’t,” Johnson says.

The exercise helped Carr and the team at ONS develop an understanding of leadership based on openness and acceptance. “It forced people to think about change, and become much more reflective in how they deal with changes that are introduced,” says Carr.

“Lots of people cited just being given the opportunity to reflect on how they see things. BAE Systems was very frank about the challenges it had faced and how it had dealt with them. Our people really benefited from that.”