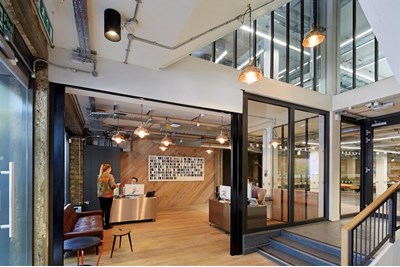 To help it innovate digitally, insurance firm Aviva has created a hub space for digital talent

At Aviva’s Digital Garage it’s hard to remember you’re in the offices of an insurance company. Nothing here would look out of place at the latest, shiniest company to explode onto the UK tech scene. And its location on London’s Hoxton Square would be the envy of even the very trendiest gourmet coffee shop or boutique.

And yet Aviva can trace its history back to the establishment of the Hand in Hand Fire & Life Insurance Society in 1696. Safe to say it definitely existed, as head of digital innovation and new business Paul Heybourne points out, “pre-internet”.

Which presents a tough challenge. To keep up with an age where customers increasingly demand quick, intuitive digital experiences in all areas Aviva needed, in the words of Heybourne, “to reinvent its DNA”.

Digitising a pre-internet company, with all its analogue legacy systems and processes, is no mean feat. And it can’t be, explains director of customer experience Kevin McQuillan, “just a case of putting a website on top of existing products or processes”.

It is telling perhaps that the first person I’m introduced to on my tour is the director of customer experience. Aviva’s digital strategy, McQuillan explains, is deeply routed in understanding and engaging with the customer. He explains that the challenge is that insurance products are seen by most as a necessary evil – something they have to pay for but typically only really engage with when something’s gone wrong. So Aviva’s digital strategy is geared around creating innovative products and services that encourage positive interaction with the brand – tools that might not lead directly to a sale but will build customer loyalty.

And thus, back in July 2015, the Digital Garage was born. So why the separate space? Why not extend Aviva’s City of London group HQ to accommodate a rapidly expanding digital team? And why the trendy pod chairs and strict ‘no-tie’ policy? (CEO Mark Wilson had his tie cut off him by the team when he first visited.)

As global director of digital product and design Charles Reeves shows me around the Garage’s various themed meeting rooms and break-out spaces, and around the separate factory space next door where designers and developers bring those ideas tested in the Garage to full fruition, he explains that it’s certainly not about trendiness for trendiness’s sake.

“At a lot of start-ups I’ve worked in there’s often the expectation you need a foosball table, you need loads of free treats,” he says. “But this isn’t about that… People get into these spaces and have fun getting creative.”

He adds: “It all comes down to the ability to form great relationships and collaborate. In my experience this work is even more collaborative and interactive [than other forms]… the processes of getting there are just so interactive.”

Group chief people officer Sarah Morris adds that there is an element of this kind of environment being something “you have to have” to attract much in-demand top tech talent. But she agrees that collaboration is king, revealing that this is a concept Aviva will eventually roll out to all corners of its business, where feasible. Indeed the beauty of having such a markedly different space is giving permission to existing employees, not just newer digital specialists, to “think and behave differently,” she says.

Morris explains that “there’s a constant flow through the building” of people from Aviva’s other locations as new project teams are formed and disbanded: “A couple of people from our customer experience team at one of the European businesses came and did three months here. I had one of my people directors from Spain spend six months here. They were working with the digital director, helping them attract better talent, but also soaking up the atmosphere… so they go back and recreate that in a business where you can’t have a whole garage, but maybe a wing.”

The learning goes both ways, she explains. Not only do ‘regular’ members of the team get ‘seconded’ to the Garage to learn to think more digitally and collaboratively, it’s vital the digital team are enabling ideas that experienced, customer-facing employees have been mulling perhaps for some time.

The environment and team make-up is specifically geared around rapidly testing such ideas, explains Morris. “We can bring a product from conception through to delivery in 90 days, whereas go back five or 10 years and we would take two years to develop a product, spend £100 million on it, and then work out it wasn’t quite what the customer wanted,” she explains.

Take Aviva’s new Homechecker web tool, which advises on factors such as crime, likelihood of subsistence or flooding, and standard of schools in any given area. The idea was born from a member of the Geo Spatial Analytics team becoming renowned internally for using his datasets to advise employees moving house. “The guys had been round various Aviva departments trying to find the person who would take this further. It wasn’t until the Garage was launched we were really able to do this,” explains digital innovation manager Alex Allen.

Of his own motivations for working at the Garage, Allen says: “The disruption of music or movies – everyone’s doing that; no-one has really cracked insurance. Anybody truly into innovation loves a challenge and this is definitely a challenge.” Regarding Aviva’s new much more digital approach, he adds: “I’ve never bought into the company strategy more than I do now.”

The Garage is not only doing a good job of retaining existing digital talent, its remit is also strongly geared around bringing in and investing in start-ups working on a product potentially of value to Aviva. “Through Aviva Ventures we’re investing £100 million over the next four years in start-ups, not necessarily in the insurance space but important to our strategic goals in some way,” explains Heybourne. “So that could be great data analytics solutions, it could be a great Internet of Things solution…”

Examples so far include ‘doctor in your pocket’ remote healthcare app Babylon, which now sits as a permanent, separate team within Aviva; and Cocoon, a security device that alerts homeowners to movement and sound in their house while they’re away using ‘subsound’ technology to detect pitches outside of the range of human hearing.

“Start-ups are post-internet and so are digital by design, so that can really help us in terms of injecting some of that mindset and capability within our organisation,” Heybourne adds.

As I’m escorted back out through The Garage’s chic workspaces the buzz is certainly palpable. The future of how this not even year-old concept will evolve is an exciting one. Aviva has announced a Digital Garage in Singapore, and there are plans in the pipeline for similar spaces in Poland and France.

There are also many exciting products in the offing. One that piques my interest particularly, allows drivers to borrow a friend’s car and be insured for just one or two journeys.