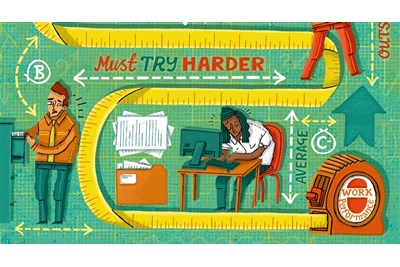 The appraisals are only relevant or acceptable to baby boomers and generation X. Gen Y and the new younger people will reject this form of contract. Only a matter of time for the dinosaurs that lead ...

The view that performance management is broken is gathering pace, but forward-thinking companies are shaking things up.

Here’s a riddle for you. What do 58% of organisations feel is not an effective use of time, yet almost 100% insist on doing? Yes, it’s the annual appraisal, without doubt one of the most unpopular phrases in the HR lexicon – one that often inspires apprehension and anxiety in staff and cynicism in managers.

Annual appraisals have been the done thing for decades, but now the view that traditional performance management is broken and needs reinventing is gathering pace.

The aforementioned stat comes from a major report published early this year by consultancy firm Bersin by Deloitte, which surveyed 2,500 organisations across 90 countries. That report revealed just 8% of companies believed their performance management process drove high levels of value, while 58% felt their process was “not an effective use of time”.

The outlook isn’t much better among employees either. A recent CIPD survey of over 2,500 workers found that almost a third described their performance management systems as unfair, while one-in-five felt that managers didn’t effectively communicate objectives and expectations.

Many organisations recognise that it may be time to reassess the situation. Indeed, almost 40% of respondents in the Deloitte survey stated that they had recently reviewed and updated their performance management system, while 31% were evaluating it at the time.

Not fit for purpose

If traditional performance management really is broken, how can it be fixed? Perhaps we first need to look at why the usual approaches may no longer be fit for purpose.

Bev White, managing director of career services at HR services firm Penna, believes that the problem lies in the fact that performance appraisals are more “carrot and stick” than “positive psychology”. “I think that is why it’s broken – it’s not performing the way it should do and is why many people leave their organisation,” she adds. “Something definitely needs to change – we’ve had these same processes for so long – do we keep running at this brick wall? It’s not working, it feels contrived, people know it’s contrived, so it has little meaning.”

Derek Irvine, vice president of client strategy and consulting at HCM solutions provider Globoforce, agrees the process is no longer fit for purpose, and believes the reason is because it hasn’t been adapted to reflect the significant changes in business practices over the past few decades.

“Times have changed and roles are now far more fluid, which means such annual performance reviews are no longer effective – they are often biased, inaccurate and too limited to provide an honest evaluation,” he says. “Essentially, traditional performance management does no-one any favours. It provides the organisation with very little actionable data and does nothing to inspire or engage employees.”

Towards the end of last year, Microsoft abolished its performance ratings and review process. This was a bold move. Microsoft has rolled out a variety of performance management programmes over the years, but all of them have always included a rating of some sort and they have always been linked to reward. Yet after employee feedback, the technology giant realised that the system it had in place actually drove the wrong kind of behaviour, the wrong outcomes and a high degree of internal competition.

“It was having a negative impact on collaboration, risk-taking and innovation,” explains Microsoft’s UK HR director Theresa McHenry. “It wasn’t particularly motivating, reward options were too rigid, and it didn’t feel great because people heard a rating and were labelled.”

As well as not contributing to the company’s wider objectives, it was creating “more division and dissatisfaction and it definitely wasn’t fit for purpose,” she adds.

While she acknowledges the appraisal system wasn’t the “root of all evil”, the fact “some considered it to be” meant something radically new was needed. So Microsoft decided to scrap the whole process. It replaced annual reviews with more regular ‘connects’ throughout the year, with the aim of creating a lighter, more agile system. It also separated reward from the performance conversation.

“We still have reward conversations on an annual basis, but it is done in a more organic way,” explains McHenry. “So rather than it being about whether a set of objectives are met, it’s now all about impact and making sure people know that it’s not what they do, it’s the impact they’re having on others and how they’re contributing to their own success, as well as their team, the business and the customers.” This very deliberately drives the notion of being rewarded for collaboration, rather than competency, she adds.

Do we need performance ratings?

For recruitment consultancy Kelly Services, other challenges in its performance management processes led it to abolish performance ratings in 2008. “There was a lack of consistency in how ratings were used, the process created angst for both leaders and their direct reports and it was time-consuming,” says director of global talent management and leadership development Terry Hauer.

Kelly’s new process is employee-driven and facilitated through two formal discussions. “Employees are responsible for scheduling and conducting the meetings with their leadership,” explains Hauer. “Between the two formal discussions ongoing communication with leaders is strongly encouraged.”

With the new process, performance itself isn’t measured; instead what is focused on is the quality of the discussion. “We trust that the majority of our employees come in every day ready to perform their jobs to the very best of their ability,” says Hauer.

“We identify high performers through a consensus process where a group of leaders must agree that a given individual is top talent. The top talent will receive compensation adjustments based on the market evaluation of their role and their position within their salary range.”

The HR department also conducts ongoing focus groups, to capture feedback and make changes to the process as needed. This agility and willingness to change ensures it remains relevant and successful.

Hauer says the new approach has led to a number of benefits, including a decreased turnover in top talent and steady turnover for the rest of the talent pool. “Employees move to other departments for development purposes rather than just for promotions or salary increases,” she says. “Our approach to compensation has allowed us to optimise limited resources and there is a distinct development mindset among our people.”

But before you start tearing up the performance management rule book, it’s critical to bear in mind that everything has to come back to the culture of an organisation. Managers need to genuinely believe there is value to be had from performance-related conversations, advises Kelly Services UK HR director Katie Ivie.

If performance management is done correctly, she adds, then it is absolutely fit for purpose. The challenge is that getting it right is far easier said than done. “Something does need to be fixed, but it’s a much deeper-rooted debate than just fixing a process,” she says. “It is about a culture and identifying, for example, how an employee’s role links back into the strategy of the organisation, what the mechanism is for setting performance objectives, and how those objectives are linked to tangible results and measured consistently. [The problem] is not just the annual appraisal process, it’s deeper than that.”

Globoforce’s Irvine believes that rather than scrapping appraisals entirely they need to be re-focused by using a crowdsourced process that gathers many opinions to achieve greater insight into how an employee is performing.

“When the traditional annual or semi-annual performance appraisal is combined with crowdsourced feedback, its worth can be greatly elevated,” he argues.

Part of the power comes from employees being recognised for their work constantly and immediately: “As the knowledge is derived from peers who work with the employee every day, the feedback holds more weight and helps that person understand how their performance affects their colleagues and can be improved to have a greater impact.”

And for McHenry, the future is lighter touch and less process-driven. “As tools, software and technology enable us to collaborate more regularly, there will be need for less heavy capture of data, because it will be more fluid and dynamic,” she predicts.

“The technology enables you to have a conversation or capture feedback on an ongoing basis, or make it more 360-degree or peer-driven, rather than manager-driven. The other evolution of employment relationships is that the hierarchical manager and team are dissipating. All of these things will influence a more fluid way of doing things.”

The appraisals are only relevant or acceptable to baby boomers and generation X. Gen Y and the new younger people will reject this form of contract. Only a matter of time for the dinosaurs that lead HR to pass

All change is a form of grief