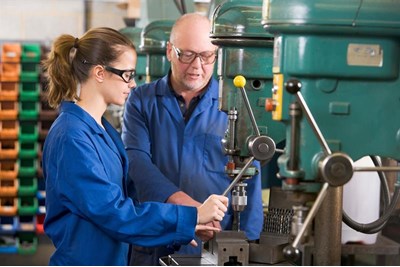 I think the headline is misleading. It's not that apprenticeships are failing women, more that women are choosing not to follow pathway which may increase their chances of being selected for an ...

Apprenticeships are failing young women in several key areas, according to Carole Easton, chief executive of the Young’s Women’s Trust.

Speaking at the Westminster Employment Forum keynote seminar on women in the workplace, Easton explained that many women face challenges that make apprenticeships a less attractive option than further education.

“Some apprenticeships pay £3.50 per hour,” she explained. “But you don’t get the benefits of being a student from that; with care to learn or travel discounts. Young women are more likely to be carers and have immediate responsibilities, which limit their choices.”

Additionally, female apprentices are spread over fewer sectors than their male counterparts. Young Women’s Trust research found that 94% of childcare apprenticeships are taken by women, compared with just 4% in engineering. For every 74 men in plumbing apprenticeships there is just one woman.

“Since 2010 women apprentices have outnumbered men,” Easton said. “There has been some gender shift, but it has tended to be men moving into traditionally female-associated roles, and less in the other direction."

“The roles women are taking apprenticeships in are less secure and lower paid,” she added. “They aren’t working in construction and engineering, but hospitality and childcare. Working in fewer sectors means fewer opportunities.”

Speaking at the same event, Peter Finegold, head of education and skills for the Institute of Mechanical Engineers, explained that it's important to understand why more women are needed in STEM (science, technology, engineering and maths).

“There is a large skills gap in engineering, and women represent a latent talent that is not being utilised,” he said.

“But while there is a shortage of talent, it isn’t the case that if there was no skills gap we wouldn’t want to encourage women into STEM fields,” he added. “Engineering is a type of power, and all citizens should have access to that power.”

I think the headline is misleading. It's not that apprenticeships are failing women, more that women are choosing not to follow pathway which may increase their chances of being selected for an apprenticeship leading towards a better paid job. I know that doesn't resolve the childcare issue, one that would also affect dads caring for their children. I would certainly be pleased to consider a women in a more traditional male role, because she will stand out from the crowd and is far more likely to have a vocation and determination to succeed.