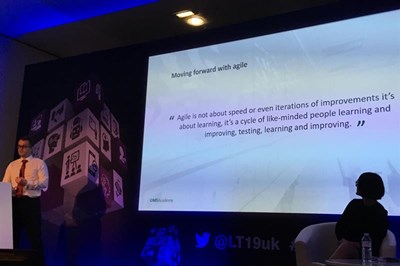 Hi Katharine, Just read this piece. Very interesting. Well done...! FYI the Agile approach is being adopted at ANZ Bank here in Australia. Might be worthwhile having a look at their website. Given ...

“The misconception is that Agile means you don’t plan,” according to Graham Hill, OMS academy learning development lead at BP.

Speaking at the Learning Technologies 2019 conference Hill admitted that, when using Agile to look at how to develop a learning offering at BP, he was the “first one to say in our team that Agile is just about not planning”.

“It’s easy to describe Agile as many things but there’s more rigour to Agile than anything we’ve ever done before,” he added.

Agile doesn’t need to be confined to IT projects, but can and should be applied to L&D, Hill continued: “So rather than an IT solution where people are already comfortable with it, try to use [Agile] in relation to L&D – and this then challenges whether you can use it in other areas as well.”

Katharine Ward, knowledge management manager at Thames Water, shared her view of what Agile learning means. “For me agile is understanding the problem, engaging with the problem, engaging with people, and being targeted and relevant with actions and having an impact,” she said. Ward described her knowledge management team as like “a dating agency, as we join the dots and people together”.

To be Agile at Thames Water, Ward said the knowledge management team and organisation does three key things. It understands insight, engages with people, and "speeds to impact and responsiveness".

On engaging people, Ward explained that one of the biggest challenges at Thames Water is keeping up with continual change in an operational environment. “Last year we had the Beast from the East and then the longest hottest Summer in about 25 years, and then a dry Winter, so we have lots of operational challenges,” she said. “For us to keep up, knowledge management and L&D need to keep pace.”

To do so, she said they have focused on co-creation: “us[ing] insight from our people and from our data... that spreads accountability”. “A lot of this comes back to the L&D world being learner-led; so not working in a dark room and imposing things on people,” Ward said, adding that L&D needs to ask learners what the problems are that need to be solved.

When the OMS academy team at BP started on its Agile journey three years ago Hill said that the first step was for the L&D function to first learn to be Agile. “We’re an L&D team so maybe we should go out and practise what we preach a bit so we did,” he said, adding that they needed “to do Agile by the book”. He then built an Agile team, with roles including a Scrum master (who he said should be the “expert in Agile”), design lead, design team, product owner/SME, stakeholder and learner.

Hill said that other steps to Agile learning include prototyping to bring the product to life and regularly test if the plan is landing, running sprint reviews to engage stakeholders and deal with problems quickly, and holding daily stand-ups to motivate teams.

Hill pointed out another misconception that Agile means speed. “If faster is your focus then you will fail,” he said. “Faster is an easy way to sell it to managers and the leadership team, but faster is a consequence not an objective.”

Speed of impact is instead one of the main benefits to embedding Agile into L&D, Hill continued, adding that the others are engagement and visibility.

Ward agreed that speed to impact is key but that “Agility isn’t about cutting corners for the sake of speed”> Instead it's about focusing on the outcomes, she said.

“What you do doesn’t have to be gold-plated, it needs to be iterative,” she said, adding that this is a huge opportunity for L&D to navigate a complex world. Ward recommended that “L&D people have to move across different roles and wear different hats” in the journey to becoming Agile, suggesting that sometimes they will have to take on the role of Scrum master.

Hill advised others looking to embark on an Agile journey that it “isn’t vastly different to what you’re doing now” other than the terminology and the mindset.

Hi Katharine, Just read this piece. Very interesting. Well done...! FYI the Agile approach is being adopted at ANZ Bank here in Australia. Might be worthwhile having a look at their website. Given the size and scope of BP and Thames Water (and ANZ Bank) I wonder if Agile only applies to large organisations or can be equally effective with SMEs, NFPs, government agencies, clubs, etc? Cheers, Dad XX